Coquito | Christmas isn’t Christmas in Puerto Rico without a glass of cold coquito (co-kee-to). If you don’t know what’s coquito my heart hurts for you because it’s the best thing EVER! I like to call it eggnog’s better tasting sassy cousin. Even though it’s nothing like eggnog.

I make bottles of this every year and give away as gifts to friends and family. Bring a bottle of coquito to any holiday party and I am positive you will be invited back the next year.

How to Make Coquito

This is literally one of the easiest recipes ever. However, it did not use to be so easy. Before canned coconut milk or cream of coconut people would have to grate fresh coconut and squeeze the coconut milk into a large bowl. But today all you need is a can opener.

All that is is required is to combine all ingredients into a large bowl and whisk until well combined. Then chill in the refrigerator before serving.

Does Coquito Have Eggs?

Like many traditional foods or drinks that coquito can trigger some passionate debate. The biggest debate regarding coquito is with or without egg yolk.

What’s the Difference Between Coquito and Eggnog?

Now I’m not knocking eggnog. In fact, my friend Rebecca has a killer eggnog recipe, much better than buying store bought eggnog.

But eggnog and coquito are not the same. I refer to eggnog as a drinking custard. It’s made of milk, heavy cream, sugar, and raw egg yolks that gently cook until thick and creamy. It is served chilled with some brandy, bourbon, or cognac.

Coquito has coconut milk or cream of coconut and is served with white rum. Some recipes will include an egg but, I’ve already shared how I feel about the egg in coquito.

The addition of egg to coquito didn’t come until much later. Abuela once told me that the addition of egg yolk was the influence of the classic American Christmas drink eggnog. How true that is I can’t say but I continue to stand firm in the no egg yolk camp. If your abuela made it with egg yolk go for it.

If you are interested in the history of eggnog and coquito listen to my interview on the podcast Every Little Thing | Is Egg the Only Nog. 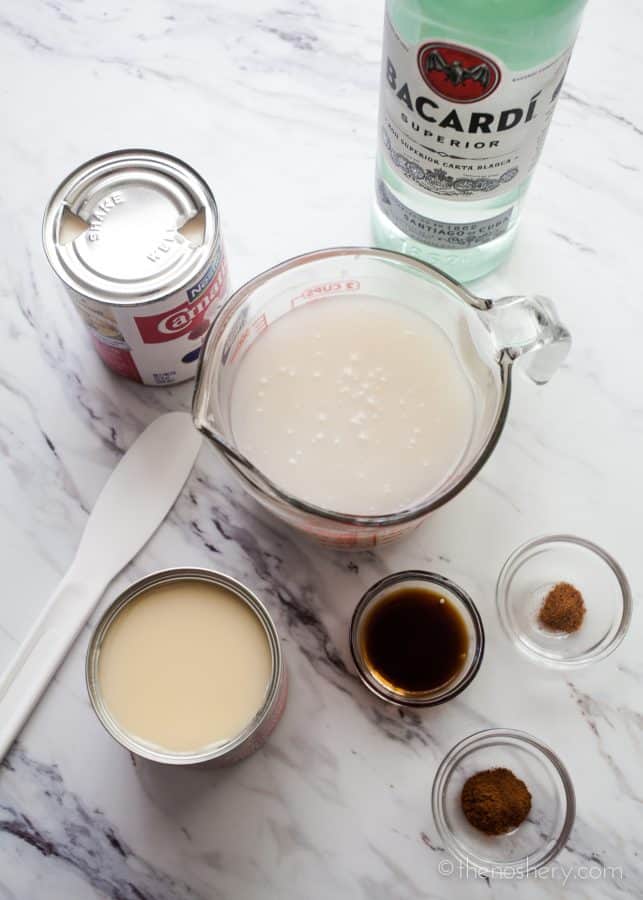 It is not coconut eggnog; it’s coquito. The egg yolk debate has been around for a long time. But the main ingredients of coquito are canned coconut milk and or evaporated milk, cream of coconut, Puerto Rican rum, and sweetened condensed milk. It will also include flavorings such as cinnamon, vanilla extract, and sometimes nutmeg. The result is a creamy coconut rum drink that is essential to any Puerto Rican Christmas celebration.

I can say with 110% confidence that you will never touch eggnog again after tasting coquito. Ok, maybe 99% confidence. But come on! Who doesn’t want a little coconut in a glass 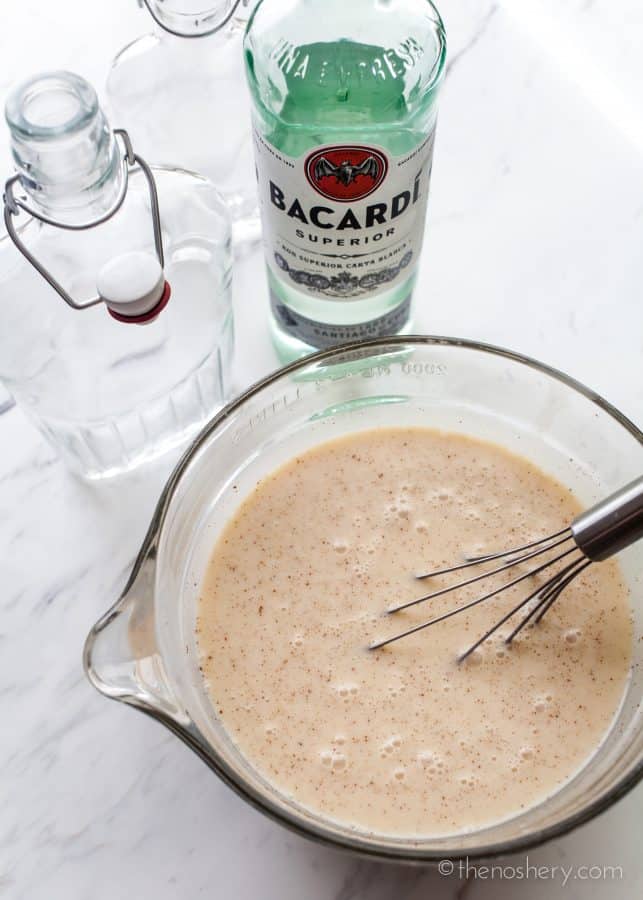 Is that Enough Rum?

In the recipe, I suggest 1 1/2 cups of rum. If that sounds like too much start with 1 cup and add more to taste. I like to add just enough rum that it’s prickly on the back of your throat and warms you on the inside. It will be one of the few drinks you’ll have that is cold that warms you up.

Just be careful because the flavor of the rum gets stronger the longer the drink “marinades”.

Can Coquito be Made without Rum?

I believe everyone should experience the joy of coquito. It is totally fine to prepare the coquito without rum if needed. You may not drink alcohol or you may be serving minors. When making a virgin version of coquito I recommend substituting coconut milk for the rum and adding rum extract to taste.

This way everyone can enjoy a festive cup of coquito for Christmas. 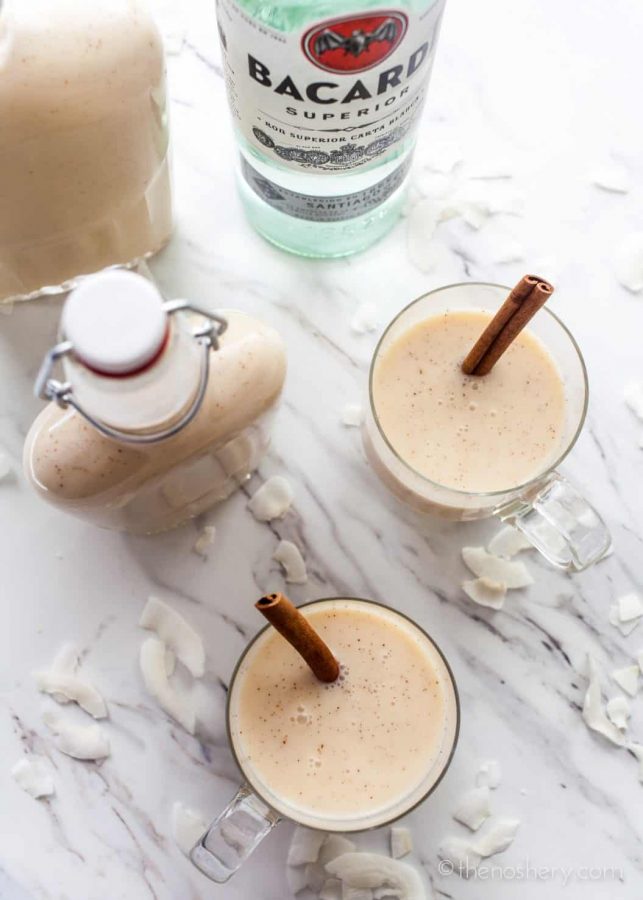 How Long Does Coquito Last?

Another reason I make my recipe without egg yolks is that it extends its shelf life. It should last in your refrigerator for 4 – 6 months.

If your coquito has a little fat cap at that top that is completely normal. That is just the cream of coconut fat separating which is normal. Give your coquito a poke and a good shake and you are good to go.

If making a version that includes eggs it might not last as long so please do not apply this time frame to other recipes. 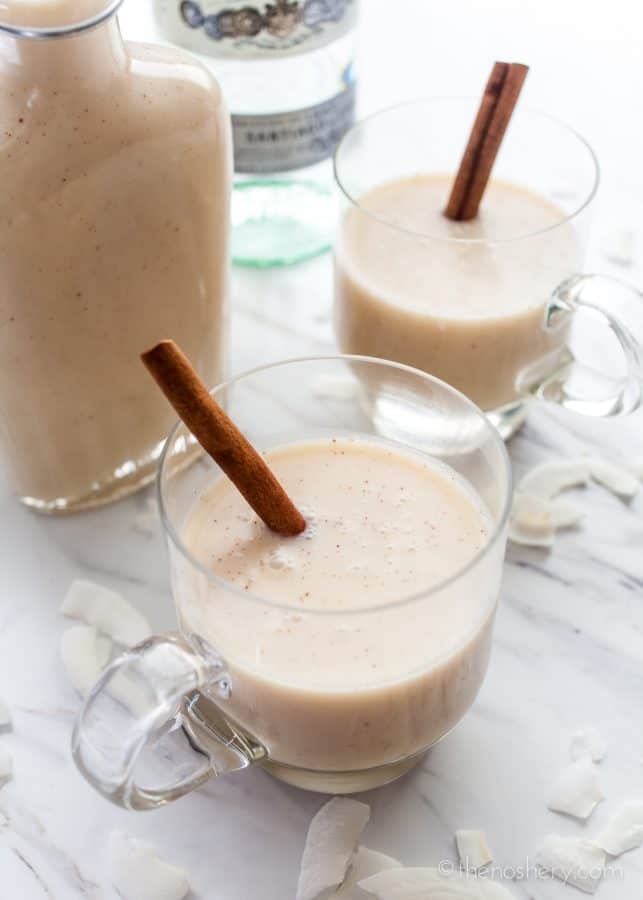 Regardless of how you or your family make coquito, I will never turn a glass down. It’s one of those things that to me is synonymous with the holidays. This drink is the definition of Christmas, parranda, family, and just good times.

If you are looking for more holiday Puerto Rican treats try Arroz con Gandules,Roasted Pernil, or Pasteles de Masa. But you have been warned all of these are incredibly addictive. Are you in search of even more Puerto Rican flavors? Visit my entire collection of Puerto Rican recipes.