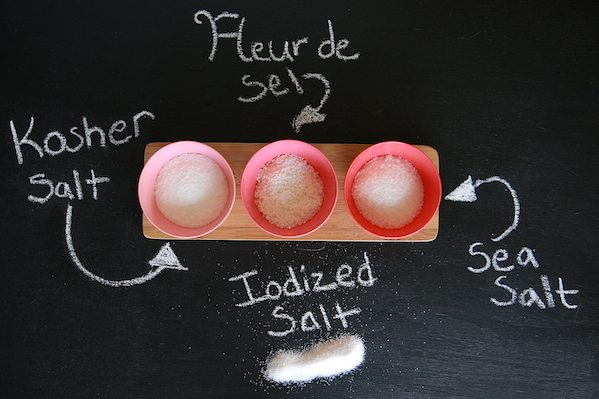 Did you know that not all salt is the same?

Salt is an essential ingredient in all cooking. In fact I would say it’s the well-known secret ingredient. It’s a natural enhancer of flavor when added to anything savory or sweet. Properly salting while cooking is the difference between a good cook and a great cook. A lot of people will make the mistake of waiting to salt at the very end. The truth is that you should be salting throughout the process of cooking. I am not talking about a teaspoon of salt each time, but just a pinch. This will build the flavor of your cooking creating layers and depth of flavor. However let me warn you that you do not want to do this with table salt because you can easily end up over salting the food. When cooking you should only use coarse grain salts like Kosher to keep from over salting.

Hence not all salts are equal. Let’s talk about the most common types of salt.

Table salt or iodized salt can be found in virtually every home. Either collecting dust in you kitchen cabinet or diligently serving duty on the dining room table.

Many people think that all salt comes from the same place. The truth is that although many salts are harvested from the sea most table salts come from salt mines. It is mined out of the earth and then refined by removing all minerals making it pure sodium chloride. After it is refined it is then treated with an “anti-caking” agent to keep it from sticking together. The combination of refinement and “anti-caking” treatment leads to a bland and bitter flavor making it the least preferred by chef’s when compared to other salts. Also its small size makes it easy to over salt food.

Not all table salt is iodized, in fact salt did not become iodized until the 1920s. During The Great Depression many people began to suffer from iodine deficiencies. Because of this people were found to be suffering from goiter, an enlargement of the thyroid gland. The government asked that salt companies add iodine to salt to help prevent iodine deficiencies. Iodine can be found naturally in sea food and dark greens like spinach and kale.

Although most chef’s do not use table salt, most pastry chef’s do. It is the prefered salt for baking because it dissolves easily and is more exact when it comes to measurements. If a baking recipe calls for salt it is table salt unless otherwise specified.

My salt of choice and of many chef’s is Kosher salt. Kosher salt’s flavor is lighter and more subtle than table salt, taste them side by side and you will see what I mean. Also there is less salt in a pinch of Kosher salt than a pinch of table salt because of its shape and size, making it harder to over salt food. This is why it is the ideal salt for cooking because it allows you season food throughout the cooking process without over salting.

Kosher salt can be mined or harvested from the sea. It’s name can be deceiving because Kosher salt is not always “Kosher”. There are two kinds, Kosher style which got its name because its unique texture and shape make it ideal for koshering meats. Kosher certified meets the guidelines of “kosher” outlined by Jewish law, kosher certification agencies and members of the Jewish faith. Kosher salt that is truly “Kosher” will be labeled Kosher Certified.

Sea salt is a broad term because really any salt that comes from the sea could be called sea salt. However sea salt is referring to salt that is harvested by the evaporation of sea water and not refined.

It is harvested by channeling ocean water into large clay trays allowing the sun and wind to evaporate the water and leaving behind salt crystals. Sea salt can be found in corse, fine and extra fine grain. It has a very bright clean flavor. Fine and extra fine sea salt can be used interchangeably with kosher or table salt. Most coarse grain salts are used in a grinder. I like to sprinkle a few grains on homemade chocolates and caramels.

Fleur de Sel or French Salt is the most cherished and priciest of this bunch at an average of $1.60 an ounce. I save it for special occasions. True fleur de del comes from the Guérande region of France. It smells like the ocean when you open a bottle and should still have a wet look to it when bought. It is ideal for salads, grilled meats, especially seafood and fresh vegetables. fleur de sel is the cream of the crop when it comes to salt, literally it’s the cream of the crop. It’s harvested by Paludiers who use wood rakes to rake the sea-foam off the top of salt marshes. Paludiers are salt farmers and salesmen in Guérande. The sea is held back by stone dykes then during high tide the seawater is channeled into the reservoirs and stored allowing the process of evaporation begin. Salt crystals start to form, creating a sort of cream on the surface of the ponds that the Pauldiers rake off the top. The weather conditions have to be just right to harvest fleur de sel and can only be harvested during the summer.

I love fleur de sel and can just sniff the ocean smell all day. I know that sounds weird, I blame it on being land locked and missing the ocean.

Regardless of which salt you choose (kosher salt) or how you choose to salt your food (through out cooking) salt is essential for enhancing flavor.