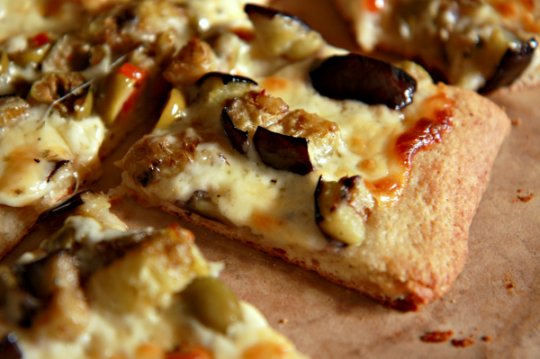 This is a continuation of my meatless week while Obed was away.

What? Don’t look at me like that.  Don’t knock it till you’ve tried it.  I will admit that when I stumbled across this recipe I raised an eyebrow or two, but then I really thought about it I figured it should be pretty good.  It has three ingredients that I love on a pizza crust, that equals a winning combination….does it not?  Regardless, this recipe caught my attention and since the Husband was out of town I figured it was time to give it a try.  Lord, knows that if I made this for him he would look at me like I fell off my rocker and knocked my head on a concrete slab. 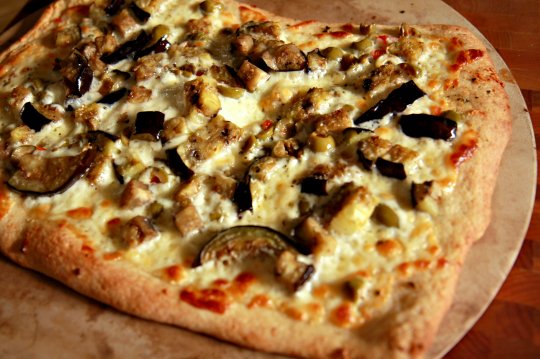 The original recipe called to grill the pizza on a charcoal grill, because the smokiness from the grill adds to the flavor.  We have a charcoal grill, but after two attempts and a phone call to Obed, I was still unable to get it to fire up.  I was frustrated, hungry, dirty and annoyed that a swarm of flies has managed to slip into my house, so I decided to take it inside.  I am much more comfortable inside in my kitchen.  Besides who knows maybe it was best considering I am likely to do something far worse that would ultimatly end with singed eyebrows. 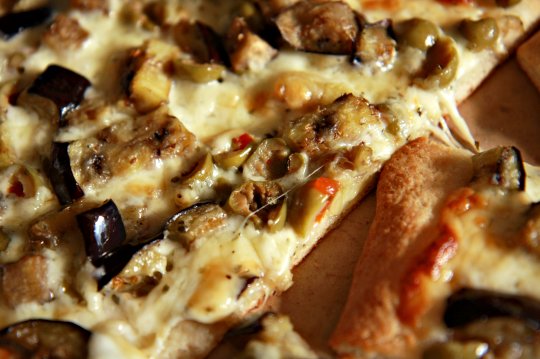 Ultimately the pizza was very tasty and surprisingly hearty.  I was a little heavy handed with the cheese but there is nothing wrong with that.  The crust was crispy and the eggplant was tender and full of flavor.  Believe it or not, the olives were my favorite part, they added this great salty compliment to the pizza.  Trust me this is not a combination to be feared.  If you are a fan of green olives you will love this pizza.

Stir together garlic and oil. Brush some of garlic oil on both sides of eggplant and season with salt and pepper. Broil, turning once, until tender, 4 to 6 minutes total. Cut into roughly 1-inch pieces.

Stretch dough into about a 12- by 10-inch rectangle on a large baking sheet and lightly brush with garlic oil. Bake in the oven at 375 degrees for 8 to 10 minutes, until underside begins to get golden-brown. Brush top with more garlic oil, scatter cheese , eggplant and olives over crust. Slide pizza from sheet onto oven rack and bake  for 15 minutes, until done and cheese has melted.