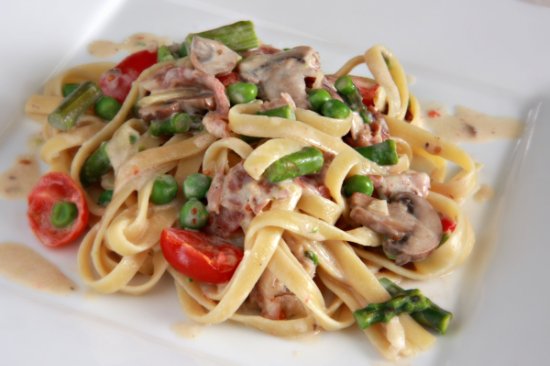 Yesterday I was in the kitchen with the windows open and the sunlight streaming in.  Outside my window I heard a rustling, when I looked out I saw a red breasted robin dancing in the dry leaves.  Spring has finally arrived.  It is almost hard to believe that earlier in the week we had 4 inches of snow.

With the arrival of spring I figured it was time a spring dish should make an appearance in my kitchen.  Pasta with fresh vegetables tossed in a creamy sauce is spring on a plate.

Blanch the asparagus in salted boiling water for 3 minutes. 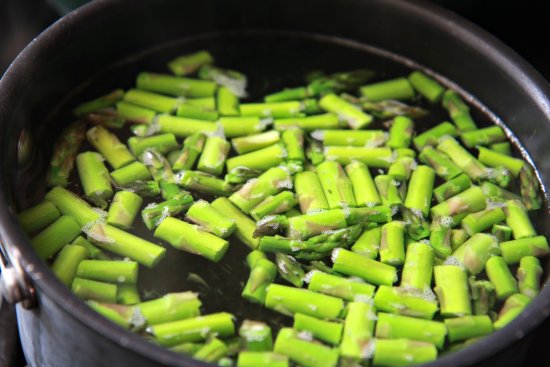 Using a slotted spoon remove the asparagus from the pot.  Do not drain the asparagus because you will use the same water to boil the pasta. 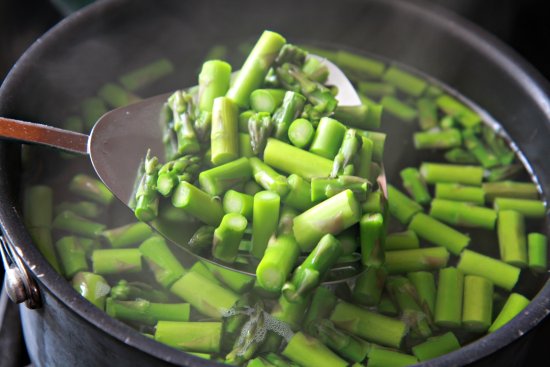 Transfer to a bowl of ice water to stop the cooking process or about 1 minute. 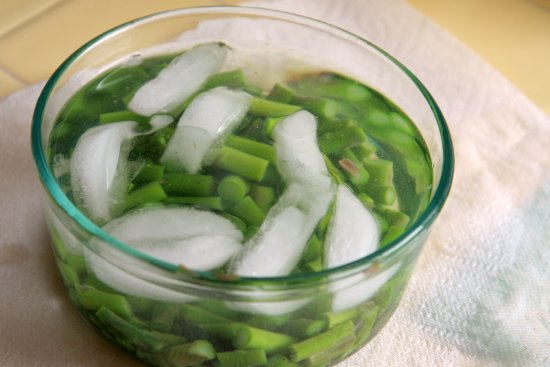 Drain the asparagus and set aside.  Bring the water back to a boil and cook pasta until al dente. 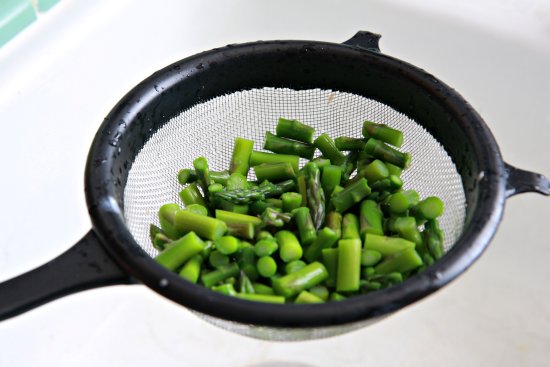 In a skillet at medium-low heat melt 1/2 a stick of butter. 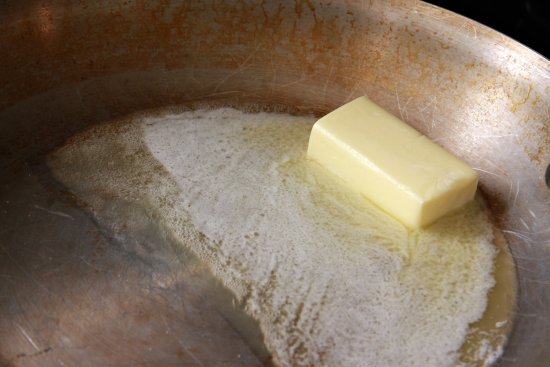 Add prosciutto and garlic to the skillet, cook for 1 minute. 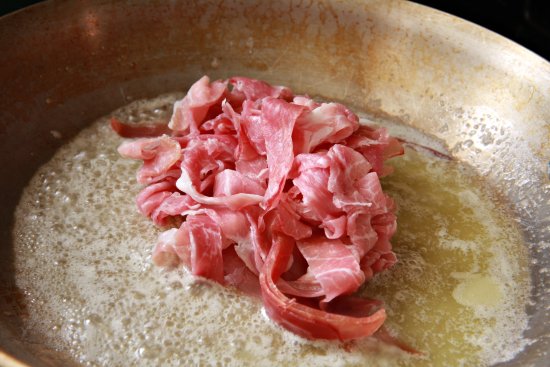 The butter will bring out the smell of the prosciutto and garlic, it smells divine! 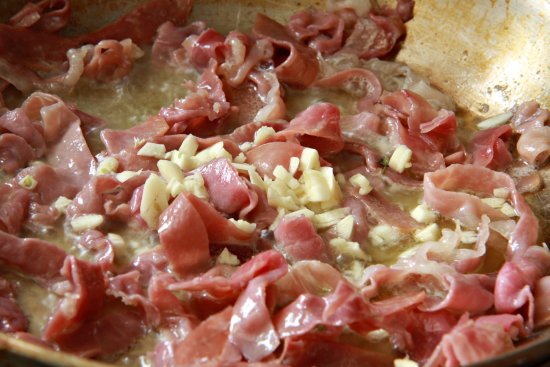 Add all the mushrooms to the pan.  It will look like a lot but they will shrink as they cook. 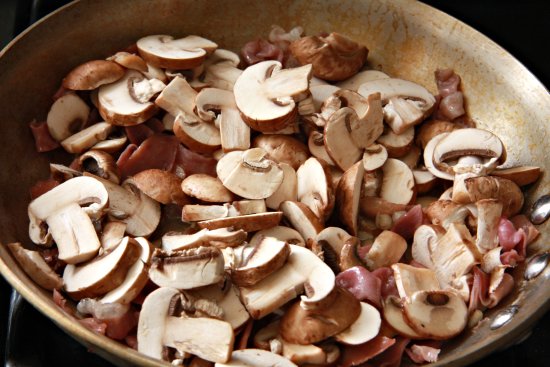 See!  Cook the mushrooms until they are golden in color, about 3 minutes. 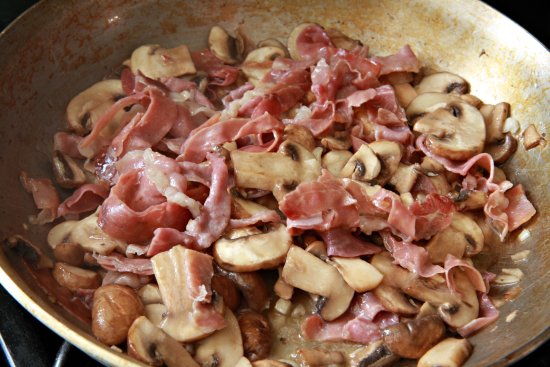 Add asparagus, peas and cream stir and simmer until reduced by 1/3, about 2 minutes.

I love the word simmer it makes me think that all the flavors are dancing around in the pan getting to know each other, like a culinary cotillion. 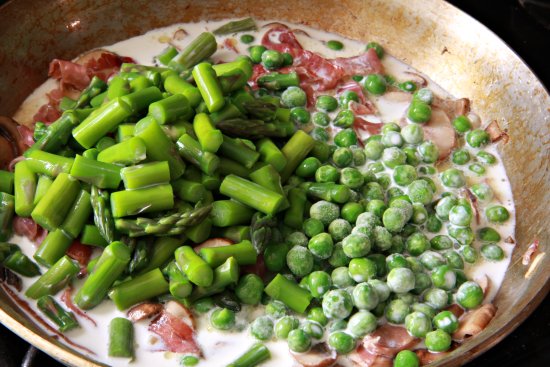 If you look closely you will notice that I had to switch pans, it was getting a little crowded.  Add freshly grated parmesan cheese to the pan and mix together until melted and smooth. 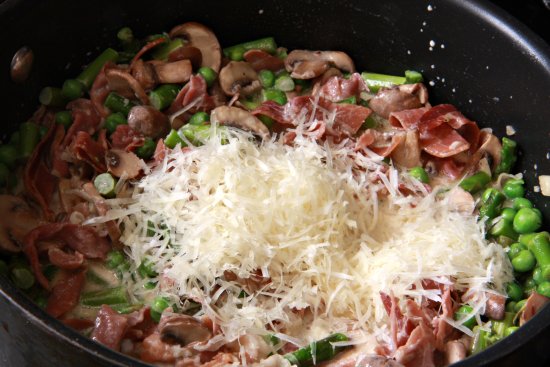 Turn off heat and toss in some to-may-toes or to-maa-toes, how ever you like to call them.  Add salt and pepper to taste.  Don’t be shy about it! 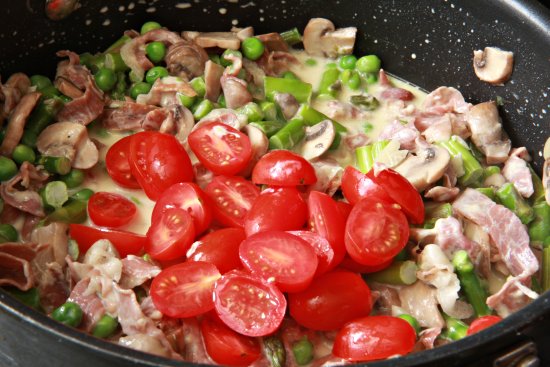 Now add one of the carbs that we all live and die for, pasta!  Toss until evenly coated. 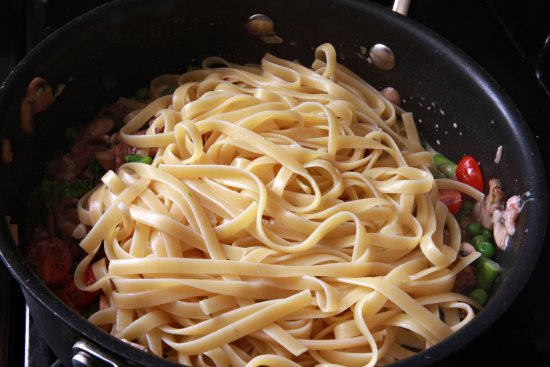 Because I am a glutton for punishment I added some more parmesan cheese. 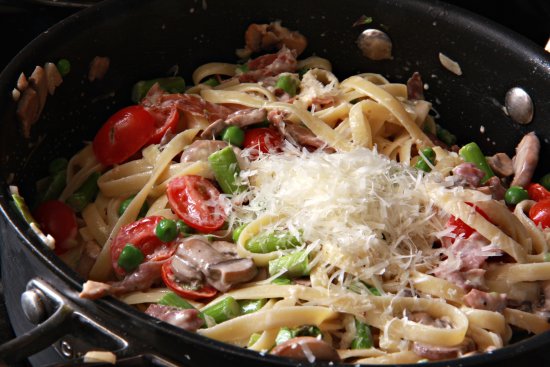 Serve immediately garnished with chives, which I forgot to add here. Oops!  I was hungry.

It was flavorful, creamy and chock full of vegetables that cry spring.

I was surprised when Obed went back for seconds.  I thought I was going to get some complaints since it had so many veggies and no meat chunks.  The only change I would make would be less peas and more mushrooms, but that is because I love mushrooms and peas not so much.    The weird thing is that Obed didn’t really seem to mind the peas so much, go figure.

The recipe called for 1 cup of peas and that is what I used but I think 1/2 a cup would have been more then enough.  I changed the recipe below to 1/2 cup of peas.

While pasta cooks, melt butter in large skillet over medium-low heat. Add prosciutto and garlic and stir 1 minute. Add mushrooms and sauté until golden, about 3 minutes. Add asparagus, peas, and cream and simmer until cream is reduced by 1/3, about 2 minutes. Add 1/2 cup of cheese and stir till melted and smooth.  Turn off heat. Mix in cherry tomatoes.

Drain pasta and add to skillet with sauce and toss to coat over low heat. Season to taste with salt and pepper. Remove from heat. Stir in remaining cheese. Transfer to large bowl; sprinkle with chives and serve.