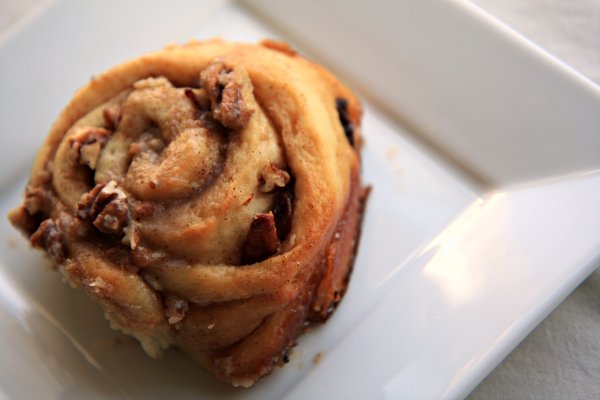 I would not catagorize myself as a baker, I am definatly a cook, but I refuse to fear baking.  I am a regular reader of The Pinoeer Woman and her cinnamon rolls are one of her most popular recipes.  This weekend I thought I would tackle them as my weekend kitchen project.  I was a little nervous becasue I have tried to work with yeast dough before and it did not go so well .  However I am happy to report that I took that dough head on and came out with a delicious treat.

I made my dough and let it rise.  I tweeked the recipe and added a few things of my own.  When I took them out of the oven they looked “beautimus”.  I then whipped up my own frosting and dausted these babies with ooey, gooey, yummines.  I decided it was time for some quality control and I cut myself a roll.  The heavens opened and I heard the angels sing in the background as I took my first bite.  I transended into the bliss of ooey, gooey, buttery cinnamon goodness.   It was all in slow motion, with grace and beauty.  My cinnamon roll radiated a beautiful glow.  Then I woke up and found myself with icing all over my face, sucking on all of my fingers and about to lick my plate.

I did not realize how many cinnamon rolls this recipe makes, it makes a butt load.  If their had been some freak natural disater where we lost power and we couldn’t leave our house.  We could have survived off of cinnamon rolls for appoximatly 3 weeks…no joke.  It made so many cinnamon rolls that when I broght them into the office there are still some left over the next day.  This is weird for an office that can devour goodies in 5.2 seconds.

Needless to say these rolls were delicious and I plan on making them again in the future.  I think I will also change them up a bit maybe make them savory with a cream cheese and chive spread with diced ham and whatever else I can think of. 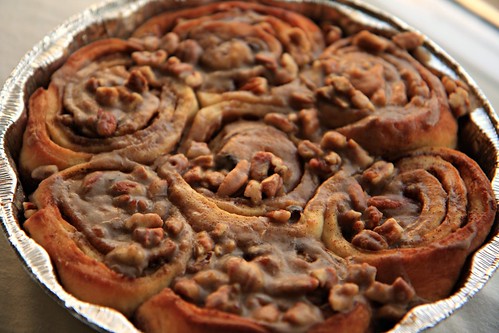 Icing ( I think these are the measurements)

Mix the milk, vegetable oil, and sugar in a pan .  Scaled the mixture, heating to just before the boiling point.  Turn off heat and leave to cool 45 minutes to 1 hour. When the mixture is lukewarm to warm, not hot, sprinkle both packet of yeast.  Let sit for a minute.  Then add 8 cups of flour.  Stir mixture together .  Cover and let rise for at least 1 hour.

Add 1 more cup of flour, the baking powder, baking soda and salt.  Stir mixture together.  At this point you can refrigerate over night or a day or 2 if necessary. If it rises over the pan, punch it down.

Sprinkle surface generously with flour.   Take half the dough and form a rough rectangle.  then roll the dough thin, maintaining a general rectangular shape.  Drizzle 1 1/2 to 2 cups of melted butter over the dough.  Now sprinkle 1 cup of brown sugar over th butter, a generous sprinkling of cinnamon, sprinkle the pecans and the raisins.  Now starting at the opposite end, begin rolling the dough in a net line toward you.  Keep the roll relatively tight as you go.  next, pinch the seam to the roll to seal it.  Spread 1 Tbs of melted butter in 7 round foil cake pans.  Then begin cutting rolls approximately 3/4 to 1 inch think and laying them in the buttered pans.  Repeat this process with the other half of the dough.  Let the rolls rise for 20 to 30 minutes, then bake at 400 degrees until light golden brown, about 15 to 18 minutes.

For the icing combine all the ingredients listed and stir until smooth.  If it is too think you can add milk 1 tbs at a time.  Taste and adjust as needed.  Drizzle over your rolls.