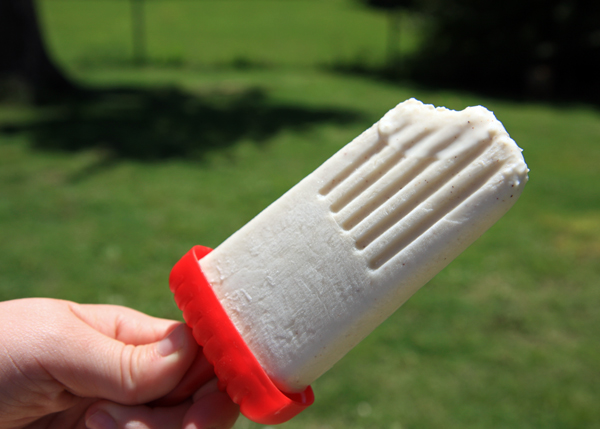 In every neighborhood in Puerto Rico there is an old lady that will sell you limber for 50 cents, back in my day it was 25 cents. Usually she will come out in a “bata” or mu-mu with curlers in her hair.  I remember when I was a little girl there was this lady that lived down the street and sold limber in 5 different flavors, coconut was my favorite.  Limber is basically a popsicle, but it is usually sold in small dixie cups.   These are a great treat on a hot day.

Today was a definitely hot and hubby spent most of his day outside while I was in the kitchen.  I had a crazy busy day in the kitchen today.  You will see the results here in future postings.

Hubby LOVES I mean LOVES coconut, I think he may have been deserted on an island in a past life and lived off of coconuts. No joke if it has coconut it has Hubby’s name all over it.  I had recently bought some popsicle molds and thought that today would be a good day to make some “limber de coco”.  After breakfast I made the mix and by the late afternoon after Hubby had been outside all day he was able to enjoy this cool treat.

Mmmmmm they are so delicious, great to have in the freezer for your kids or your hot Hubby…..you know because he has been out in the sun all day….. literally he is hot.

I have noticed quite a bit of discussion and concern about the raw egg yolk.  The egg yolk is not a do or die ingredient.  Consuming raw products is to your discretion.  However speaking from personal experience I have been consuming raw egg yolks in some form since I was a kid with no issues.  Also, relatively few eggs contain salmonella and the ones that do are most dangerous to compromised immune systems, such as very small children and the elderly.  All foods have a “danger” zone were bacteria will begin to grow and multiply.  Eggs or any food requiring refrigeration should not be held at a temperature range of 40 to 140for more than 2 hours.  The popsicles obviously are kept below 40 because they are frozen and are consumed well before 2 hours.  They are so yummy your done in like 2 seconds. 😀

I am not encouraging anyone to consume raw products.  I am just giving you some info to help you with your concerns.

By the way could you do me a favor and vote for me?