First let me apologize for the quality of these pictures.  I was multitasking to the extreme, not to mention sweating like a fiend.  HA!  That rhymed!

Anyways, I was preparing for a dinner party, cleaning house, doing laundry, getting ready for errands and on a fervent hunt for my favorite pair of jeans; which I believe gnomes hide from me in the middle of the night.   Needless to say I wasn’t very focused on my pictures.  It didn’t help that my glasses were also missing, so I literally was not focused.

This is my existence at times, which I can imagine everyone can relate.  I can’t even imagine what it is like for those of you who have little ones in addition to everything else.  I say you deserve BACON JAAAAAAM!!! In fact I say, “BACON JAM ALL AROUND!”

Now that I have had bacon jam I cannot imagine a world void of bacon jam. Sacrilege!  I must spread the word of BACON JAM!  I mean come on! Bacon + Jam how can that not be anything but awesome!

There is a little twist to this bacon jam.  Most recipes require you to watch over the onions and baby them to get a good caramelization.  But I had a plethora of errands to run and could not baby the onions, so I pulled out my trusty slow cooker.  Yup that’s right! I made bacon jam in my slow cooker.  Making it even awesomeer!  Is “awesomeer” even a word?

Use your favorite thick cut bacon.  I decided on a smoked hickory bacon because I thought that would work great as a jam.  Cut 3 lbs of bacon into 1 inch pieces, add to a heavy bottom pot or dutch oven at a medium-high heat.  You may feel tempted to turn the heat up but, you want to render the fat slowly.  If the pot is too hot you will burn the fat out instead of rendering it. 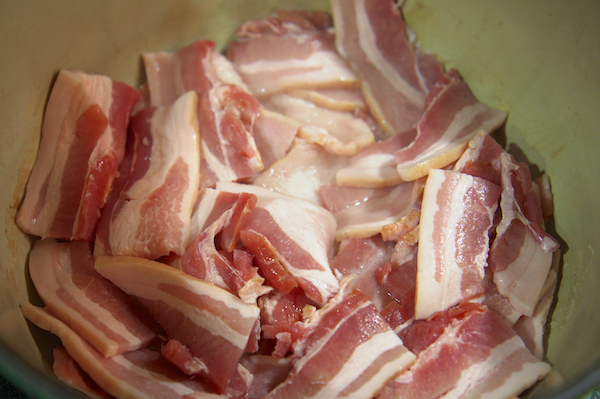 When the bacon is lightly brown and starting to crisp, use a slotted spoon to transfer to a plate lined with paper towels to drain.  Once drained add to slow cooker. 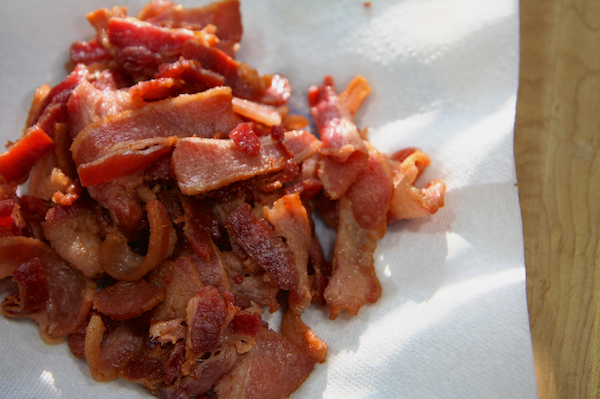 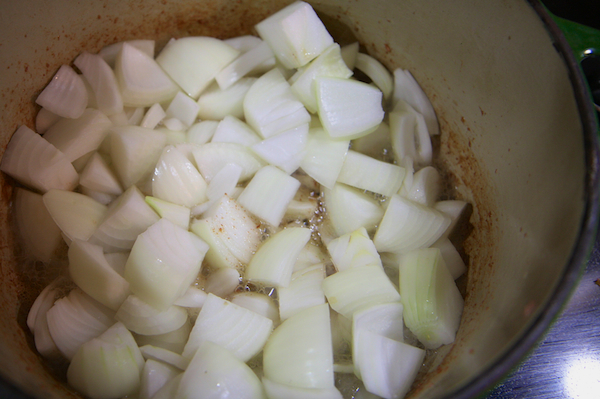 Slowly cook the onions until translucent, using a slotted spoon transfer to the slow cooker. 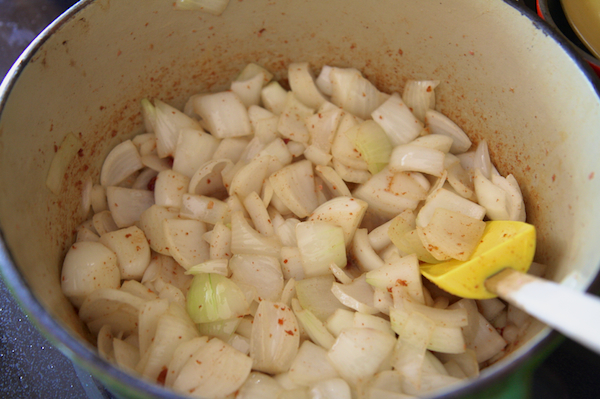 Add 1/2 cup of maple syrup, 1 cup of apple cider vinegar and 3/4 cup of coffee to the bacon and onions. 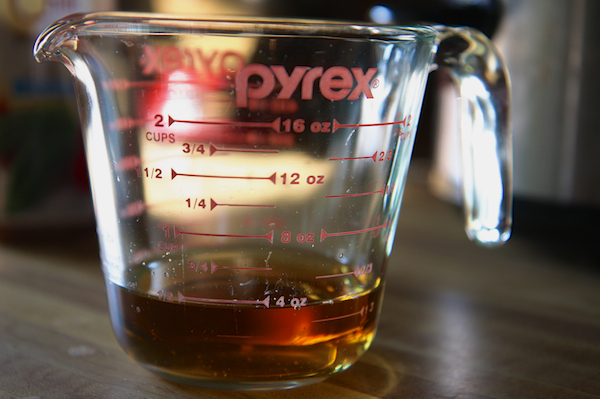 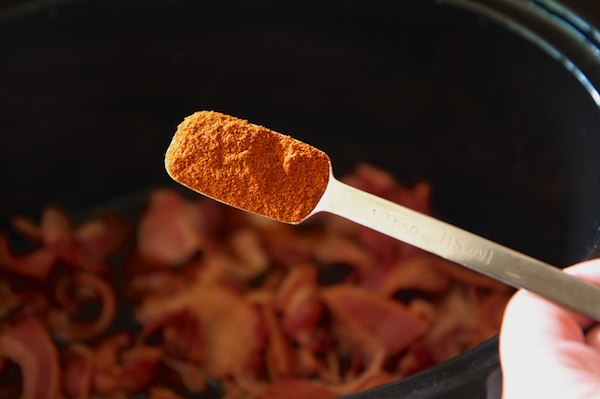 and 2 tbs of cocoa powder.   You think is smells good now, wait 4 hours. 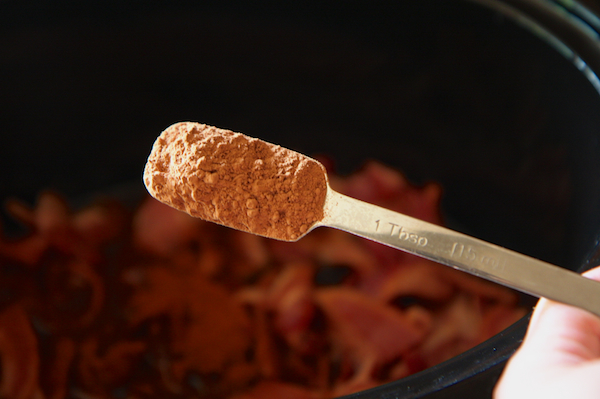 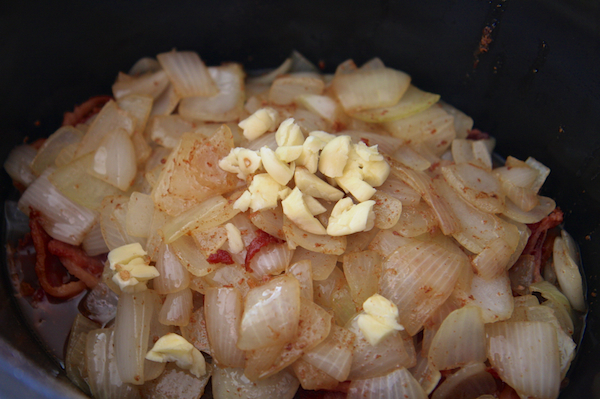 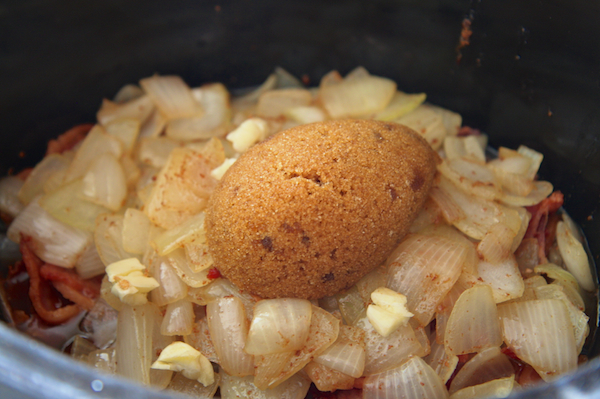 HI OHHHH!  Uncover and set on high for 1 1/2 hours or until syrupy. 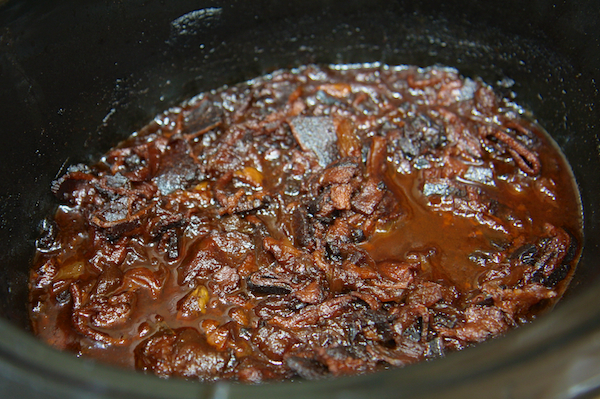 Transfer to a food processor and pulse until coarsely chopped. 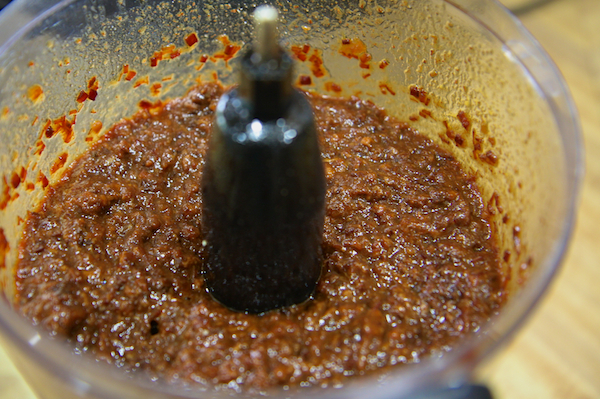 I served the bacon jam up as a little BLT appetizer.  I made some crostinis with a mixture of butter and olive oil, smeared them with the bacon jam and topped that with arugula and roasted cherry tomatoes. 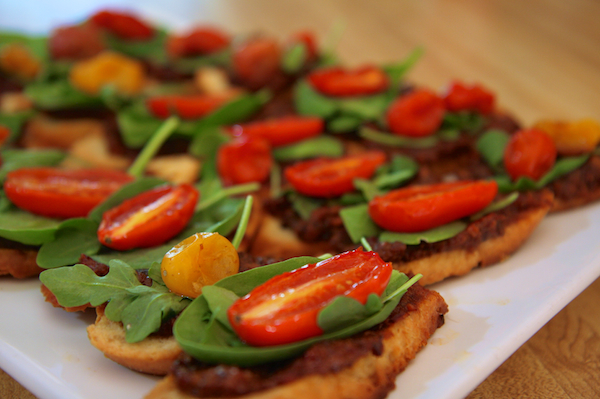 I don’t think my guest wanted to admit it but I think the bacon jam was way more popular than my entire dinner spread.  It’s ok, I was thinking the same thing.  I mean how can anything compete with bacon jam?  Like HELLLO!

Go forth!  Make bacon jam, jar it and spread it out to the masses.  This is the task I give to you…spread the bacon jam!

In a heavy bottom pot or dutch oven, cook bacon over medium-high, stirring occasionally, until fat is rendered, about 20 minutes. When the bacon is lightly browned and starting to crisp using a slotted spoon, transfer bacon to a plate lined with paper towels to drain. Add onions, and cook until onions are translucent, about 6 minutes. Transfer onion and bacon to slow cooker, add garlic vinegar, brown sugar, maple syrup, coffee, chili powder and cocoa powder.  Stir to combine.  Cover and cook on low, for 5 hours. Uncover, cook on high until liquid is syrupy, 1 – 2 hours. Transfer to a food processor; pulse until coarsely chopped.

Let cool, then refrigerate in airtight containers, up to 4 weeks or can to gift to friends.