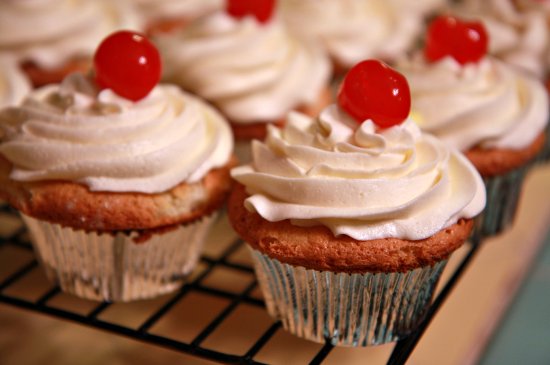 Many moons ago I attempted to make some tres leche cupcake.  My first attempt was pretty much a flop.  I went against my instincts and did everything that I shouldn’t have.  Spooning the milk mixture over the cupcakes was a stupid idea, using paper cupcake liners was another not so smart idea and my cake batter does not translate over to a cupcake very well.   I ended up with milk dripping everywhere and soggy cupcake liners.  In summation it was a disaster.

If your first attempt is not a success, do not be afraid to try again.  I decided to attempt the tres leche cupcake idea again, using a bit more common sense.  The first problem I had was that my tres leche cake recipe does not translate over to a cupcake very well.  My recipe if for a very dense pound cake and when I tried to make that into a cupcake I ended up with really hard cupcakes.  Not so good…no.   I went on the hunt for a cake recipe that I thought could work for the cupcakes.  I found Pioneer Woman’s tres leche cake and thought it would be prefect.  The cake is made by separating the eggs and folding in the whipped whites into the cake batter, making for a very light and fluffy cake. 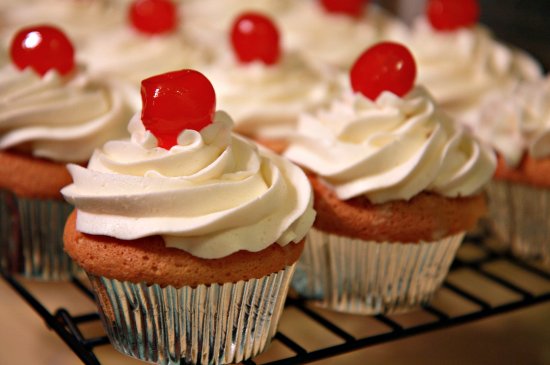 The second issue was getting the milk into the cupcake.  Spooning it over the cupcake doesn’t work and although I knew this the first time around, like a dork I still tried it.  This time I thought I would use the noodle that God gave me a bit more efficiently and be a little smarter about it.   I got my hands on a meat/flavor injector.  If you have a husband that likes to smoke and grill you may already have one.  If this is the case be sure to give it a really good cleaning and soak the needle and plunger in hot water.  Otherwise go out and buy yourself one, it is well worth the investment and doesn’t cost much at all.

The final issue that I had to over come was the cupcake liner.  A common paper liner will not work, the milk will eventually soak through and start to drip.  It makes quite a mess.  The foil liners held up beautifully.

Since I was making all these adjustments for the cupcake, I decided to change up the frosting too.  Traditionally the frosting on a tres leche cake is just whipped cream frosting, but it can get kind of sad and droopy sitting on a cupcake out of the fridge for too long.  Besides I seem to have a extreme inability when it comes to making whip cream.  It is just something I am severely deficient at.  I found this frosting recipe,(I can’t remember where), and it works perfectly for this cupcake version of the tres leche cake.

The cupcakes were a success!  The cake was moist and fluffy, the milk stayed in the cupcake, there were no soggy liners and everyone loved the icing.  YEAH for me!  Give them a try I am sure you will love them just as much as we did.

Beat egg yolks with 3/4 cup sugar on high speed until yolks are pale yellow. Stir in milk and vanilla. Pour egg yolk mixture over the flour mixture and stir very gently until combined.

Beat egg whites on high speed until soft peaks form. With the mixer on, pour in remaining 1/4 cup sugar and beat until egg whites are stiff but not dry.

Bake for 15 minutes or until a toothpick comes out clean. Cool cupcakes on cooling rack.

Combine coconut cream, evaporated milk, and heavy cream in a small pitcher. When cupcakes are cool, fill a meat injector with milk mixture, pierce the cupcake and inject about 1 tbs of mixture in three different spots. Try not to inject too deep, or all the milk will settle at the bottom. The milk mixture will seep out the top when full.

Allow the cupcakes to absorb the milk mixture, refrigerate for 30 minutes or overnight.

In a mixer beat together powder sugar, butter and whipping cream until fluffy.  You can add more whipping cream 1 tbs at a time for desired consistency.

This frosting is best served room temperature.  Frost your cupcakes on the same day you are going to serve them.  You can pipe on the frosting or spread it on.  Bloat excess syrup off maraschino cherries and use to garnish cupcakes.

Leftover cupcakes have to be refrigerated because of the milk.