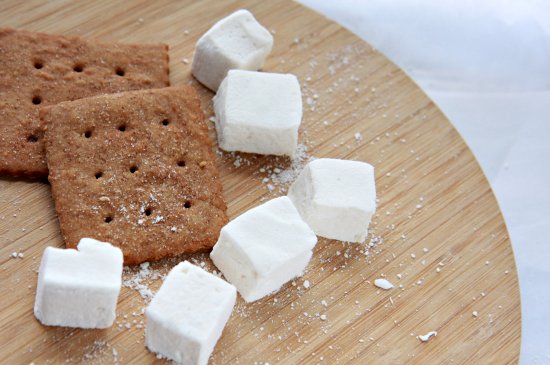 I meant to have this post up several days ago.  In fact the idea was for this to be a Christmas Eve post, but it didn’t happen.  I was a little preoccupied by the snow/ice that decided to fall in the middle of the day.  Then Obed and I decided to brave the snow and go to the Christmas Eve service at church, after work.  It was a great service, lot of laughs and fun and the wonderful story of Christmas.   Then we had to drive home and that is when the fun really started.

The snow that had fallen was light and fluffy and blew with the slightest wind, causing virtual whiteouts.  While driving home we saw several cars that had gone off the road and where stuck in the snow.  I wasn’t surprised because you couldn’t see the roads and there wasn’t a snow plow in site.

I was talking to my mother on the drive home and I was so nervous I had to get off the phone so I could concentrate on my nervousness.  Does that even make sense?  I just couldn’t really focus on the conversation when I was in fear of falling into a ditch somewhere.   However my husband, who grew up in Florida and has driven in the snow on maybe two prior occasions did a wonderful job and got us home safe and sound. 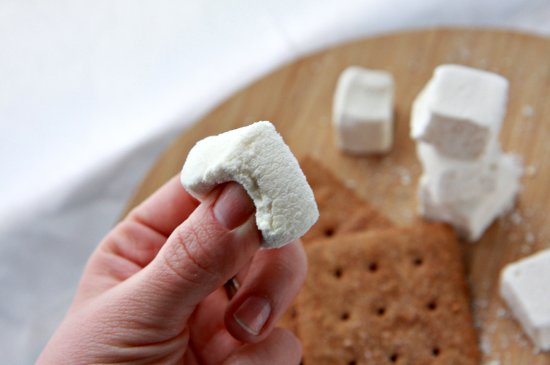 As soon as we got home we released the hounds into the backyard and Obed too.  The labs and Obed were loving the snow, but myself and my two little ones weren’t digging it so much at first.  However they did do better the next day.   In fact I couldn’t get them to come into the house.  When everyone settled down we…..ok….Obed built a fire and we roasted some s’mores.   Ahhhhhhh!  😛 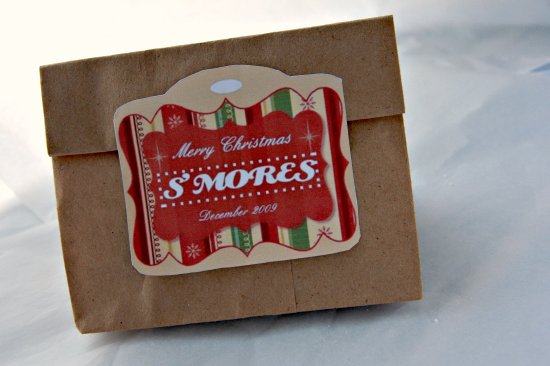 I had homemade graham crackers and marshmallows leftover from s’more kits that I had made for Obed’s team at the office.   I thought the kits would make a great gift and I got the idea from my very sweet and creative friend Beth at Stories of A to Z.  I had a graham cracker and marshmallow receipe that I have been wanting to make from the lovely Smitten Kitchen and I finally got the perfect reason to give them a go .   I made the label by using Scrapblog.com as Beth had suggested and used some trimmed brown paper bags for the packaging.   I did the baking and Obed helped assemble the kits. 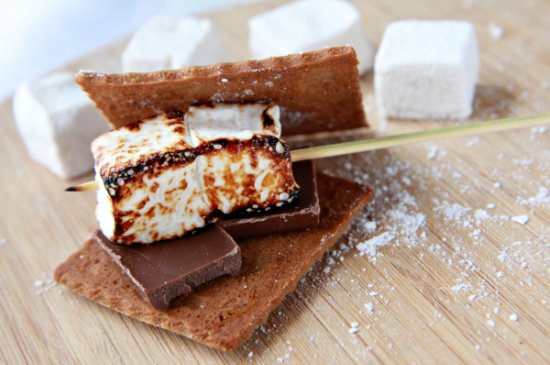 Everyone loved their little kit and the most popular question of the day was, “You can make marshmallows?” 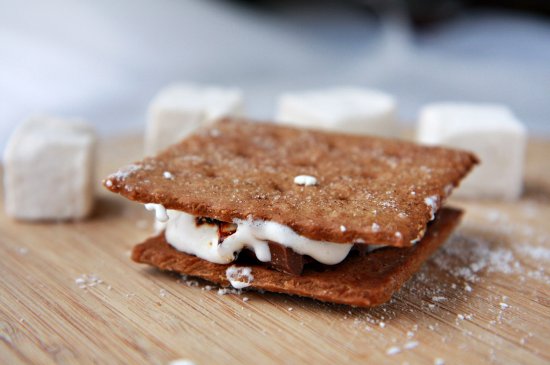 I put those previously fluffy, now sticky marshmallows between the two graham crackers with some chocolate and pressed it together and all the marshmallow goo’ed out the sides.  It was a delicious site to see. 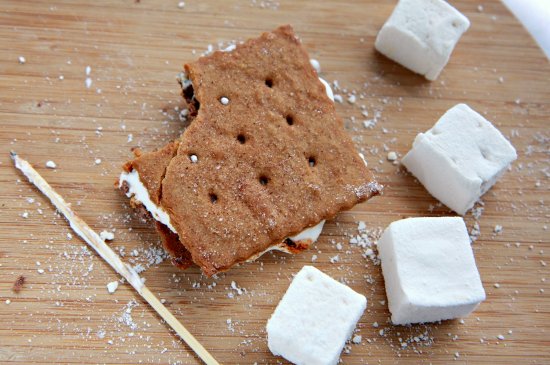 Then I took a bite and I was in heaven, a far more warm and cozy heaven compared to the blizzard conditions we were experiencing.

Yes I got marshmallow and chocolate all over my fingers and some on my nose and chin, but that is the measure of a good s’more…..is it not? 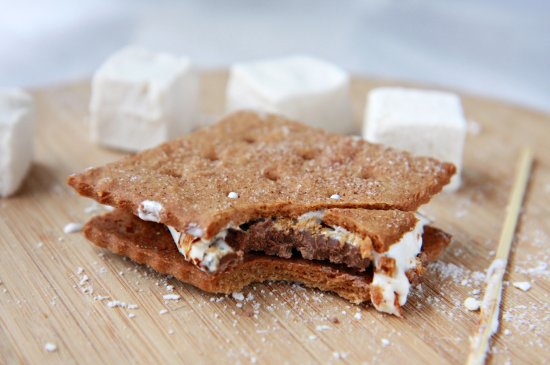 The original recipe called for the crackers to be chilled for 30 minutes after rolled out and cutting and to bake for 25 minutes.  Because of time issues I did not chill the crackers before baking.  Also, mine appeared to be done between 10 and 15 minutes, baking them for 25 made them over brown.  It may just be my oven.

In the bowl l of an electric mixer fitted with the paddle attachment, combine the flour, brown sugar, baking soda, and salt. Mix on low to incorporate. Add the butter and mix on low, until the mixture is the consistency of a coarse meal.  You can also used a food processor, with a blade attachment.

In a small bowl, combine honey, milk, and vanilla extract and whisk. Add the honey mixture to the flour mixture and mix on low until the dough barely comes together.

Press the dough together and turn the dough out onto a lightly floured work surface.  Shape the dough into a rectangle about 1 inch thick. Wrap in plastic and chill until firm, about 2 hours or overnight.

To prepare the topping: In a small bowl, combine the sugar and cinnamon, and set aside.

Adjust the oven rack to the upper and lower positions and preheat the oven to 350 degrees.

Once the dough has set and chilled, divide the dough in half and return one half to the refrigerator. Lightly flour your work surface and roll the dough into a long rectangle about 1/8 inch thick. The dough maybe sticky, so flour as necessary. Trim the edges of the rectangle to 4 inches wide. Working with the shorter side of the rectangle parallel to the work surface, cut the strip every 4 1/2 inches to make 4 crackers. Gather the scraps together and set aside. Place the crackers on one or two parchment-lined baking sheets and sprinkle with the topping.

Gather the scraps together into a ball, chill until firm, and reroll. Dust the surface with more flour and roll out the dough to get about two or three more crackers.

Using a toothpick or skewer, prick the dough to form three dotted rows about 1/2 inch for each side.

Bake for 15 minutes, until browned and slightly firm to the tough, rotating the sheets halfway through to ensure even baking.

Repeat with the second batch of dough.

Do ahead: Marshmallows keep in an airtight container at cool room temperature 1 week.

In bowl of a standing electric mixer or in a large bowl sprinkle gelatin over 1/2 cup cold cold water, and let stand to soften.

In a 3-quart heavy saucepan cook granulated sugar, corn syrup, second 1/2 cup of cold water, and salt over low heat, stirring with a wooden spoon, until sugar is dissolved. This may take a bit, it took about 10 minutes for me.  Increase heat to moderate and boil mixture, without stirring, until a candy or digital thermometer registers 240°F, about 12 minutes. Remove pan from heat and pour sugar mixture over gelatin mixture, stirring until gelatin is dissolved.

In separate medium bowl with cleaned beaters beat egg whites (or reconstituted powdered whites) until they just hold stiff peaks. Beat whites and vanilla into sugar mixture until just combined. Pour mixture into baking pan, scrapping can make for a sticky mess, oiling you spatula will help.  Sift 1/4 cup confectioners sugar evenly over top. Chill marshmallow, uncovered, until firm, at least three hours, and up to one day.

Run a thin knife around edges of pan and invert pan onto a large cutting board. Lifting up one corner of inverted pan, with fingers loosen marshmallow and ease onto cutting board. With a large oiled knife or pizza cutter trim edges of marshmallow and cut marshmallow into roughly one-inch cubes. Sift remaining confectioners’ sugar back into your now-empty baking pan, and roll the marshmallows through it, on all six sides, before shaking off the excess and packing them away.