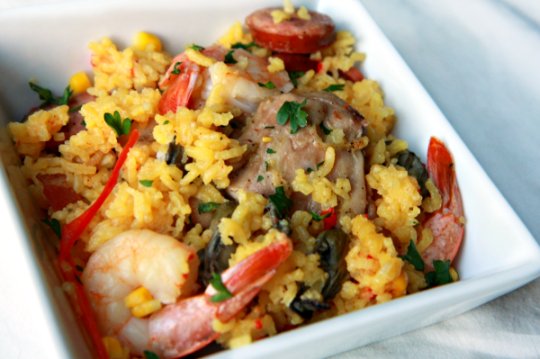 This weekend was relaxing and uneventful, which is pretty much how I like my weekends to be.   I didn’t do much cooking, but I did a little baking experimenting which you will have to comeback to read about later.

I went fishing around in my drafts to see what I sitting around half done.   I had completely forgotten this post for Paella.  Paella is a Spanish rice dish that is cooked in a shallow pan, it is sort of a “jambalaya” of saffron rice, various meats and seafood.  I do not have a paella pan but I found this recipe and it suggested baking it in a shallow baking dish.  I figured I would give it a try.

I was generally happy with the results but I wasn’t doing back flips.  I did think that the rice came out a little on the wet side and I made the mistake of adding some canned oysters that I had, BIG mistake.  I was able to pick them out afterwards so it wasn’t so bad but I wouldn’t do it again.   Now don’t get me wrong it tasted good (after I picked out the oysters) and I would make it again, I just wasn’t doing somersaults over it.   I think my issue was that I had never had a paella before and I was expecting it to be really different, I don’t know why, but it turned out to taste like something I had before, no “wow” factor.  I like my Arroz con Gandules better.

However, I am not going to close the book on this one.  I WILL  make another attempt in the future!   I WILL buy myself  a paella pan and I WILL conquer the paella!

Sprinkle chicken pieces with salt and pepper. Add chicken to pot with bacon drippings in pot and cook over medium heat until brown, remove chicken from pot and set aside.

Add chopped onions and garlic to pot and saute until they begin to brown and crisp, scraping up any browned bits, about 8 minutes. Stir in rice, roasted pimientos with juices and Sazon. Add clam juice and chicken stock to pot and bring rice mixture to simmer. Remove from heat.

Bake paella until chicken is cooked through and rice is tender, about 45 minutes. Remove foil from baking dish. Let paella stand 10 minutes. Serve with lemon wedges.