Just over a month ago we moved into a new house. We found it off some ambiguous ad on craigslist. All it said was 3 br/2 1/2 bath and the address. At first OB and I weren’t even going to bother looking at it, but it was a Sunday afternoon and we were out and about on a drive so we figured it wouldn’t hurt to look. It was a little scary from the outside. The front garden was over grown with mondo grass and had a small pond feature that looked like the swamp thing was about to crawl out. I swear I saw something move in the pond. The inside had some character of it own, which include a step down bar, a tub big enough to bath all four of my dogs as the same time and a fire place right in the middle of the living room. With all if it funky character I immediately fell in love with it. 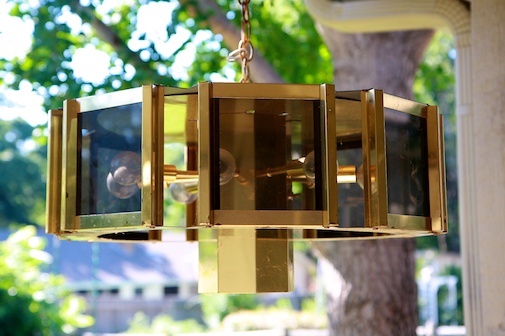 The first week we moved I was trying to figure out what to do about the lighting. Over the dining room, area was a hideous white track light, circa 1989, a real eyesore. Kind of like a track suit I recently saw on People of Walmart. OB and I crawled up into the attic to put a few things in storage and far back in a dark corner I found two light fixtures. A baby and mama lamp, which I assume were house’s original light fixtures. They were covered in dust, tarnished brass and black tinted glass, not cute. But I saw some potential so we brought them down from the attic and cleaned them up. 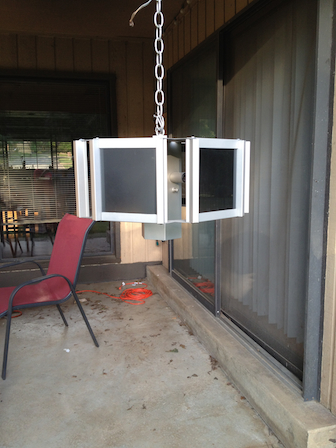 I knew right away that brass was not going to work. The brass reminded me too much of my grandmothers house and gave me and overwhelming desire to crimp my hair. I decided to do baby lamp first because it would go over the dining room table, and the ceiling is lower on that side. I took the lamp apart and covered the sockets with painters tape. First I gave everything a good coat of primer and once dry I sprayed everything with a nickel finish spray paint. On the other hand, I was a little perplex what to do with the glass panes. That is when I thought I would spray them with a frosting spray. I figured a white frost on a black tinted glass pane would make gray. 😀 That is what I learned in art class anyway. 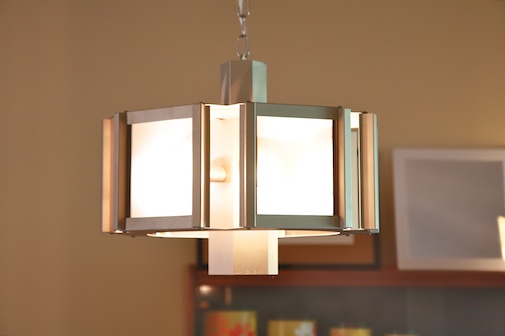 I also had to get a new chain and rewire the lamp because the wire it had disintegrated over time. I picked up a swag lamp kit from the local hardware store and wired it to the lamp. The end of the wire had a plug on it though. OB snipped the plug off and stripped the two wires and connected them straight into the box in the ceiling. Being sure to cut the breaker of course before wiring the lamp. I didn’t need a crispy fried Puerto Rican on my hands. 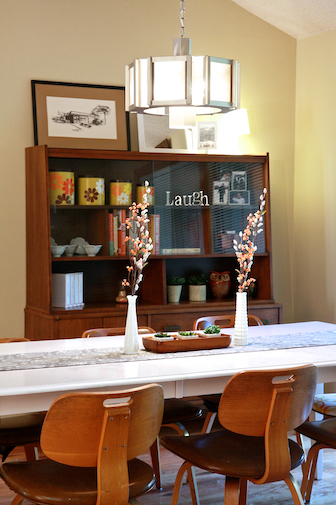 TA-DA!!! Some primer, a little spray paint and a swag lamp kit and the old are made new again. I was so glad to see the ugly track light gone, and my first project complete, now to burn that image of that lady in her track suit on People of Walmart out of my brain.