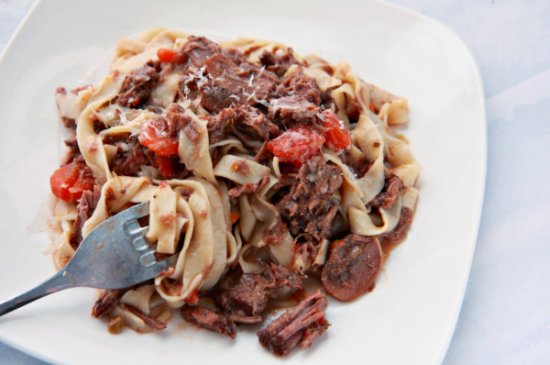 If anyone has been following my twitter feed you are well aware that my camera is sick and has been sent to Dr. Canon.  I cannot express how upset I was to send my camera off for repair.  I feel like I have lost an appendage.  Alas I have hope that it will return to me like new and we will be back to our old tricks again.  Unfortunately I have no back-up camera and this is hindering my posting process. 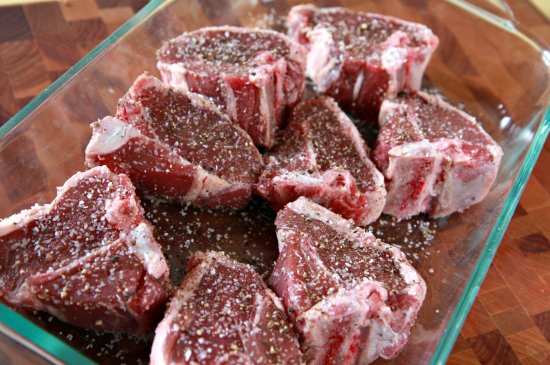 I went digging through my photos to see if I had something that I hadn’t posted yet.  I found this lamb ragù which was delicious but I wasn’t happy with the photographs and thought I would re-shoot it in the future.  I had also made my first attempt at homemade pasta and over cooked it to the point that the noodles pretty much dissolved in your mouth.  It was not a good texture, it was mushy.  Rookie pasta making mistake….fresh pasta does not have to boil nearly as long as dry…duh! 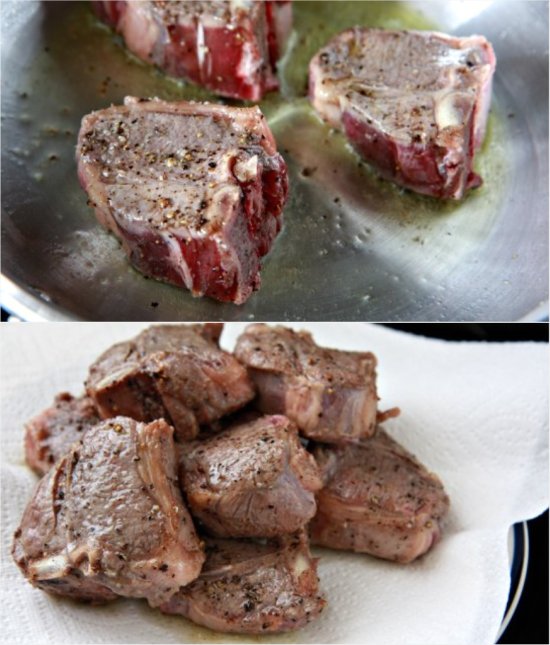 Earlier in the week we were at Sam’s after a winter storm and all the meat was on sale including the lamb shanks.  For a long time Obed was reluctant to try lamb since he had tried it before an it was gamy, but he decided he was willing to give it another try.  I had been dying to make some kind of lamb dish so I jumped at the opportunity when I got the green light. 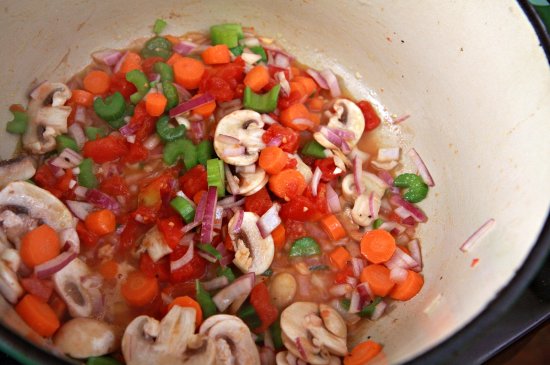 This ragù was simple to make and just requires time to braise.   I did add a few more veggies to the original recipe to give it a bit more heartiness since it was so cold and dismal outside.   I also used red wine instead of white wine because I had it on hand and I did not feel like trekking any further in the snow to get another bottle of wine.   Beside when cooking with red meat I almost always default to red as opposed to white wine.   Call me old fashion but I just think it makes more sense. 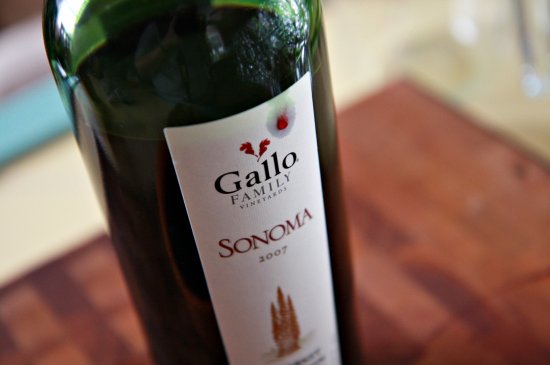 With minimal effort and a few hours later I had a beautiful and rich lamb ragù.   It was perfect and hearty and I killed it with mushy noodles.  I was so disappointed.   But I redeemed myself eventually.  I had some ragù left over so a few days later I boiled a pot of rigatoni, tossed it with the ragù, placed it in a baking dished, topped it with shredded mozzarellaand baked it at 350 for about 25 minutes or until the cheese was melted and bubbly.  It was a quick and easy weeknight dinner.  Obed was pleasantly surprised by the lamb and was successfully converted.  He gobbled up every bit of the non-mush noodle version. 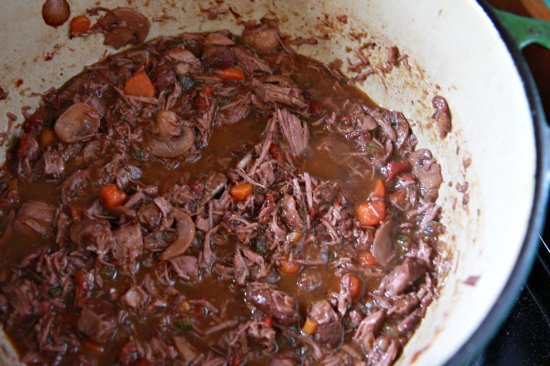 Although my noodles were a sad and mushy failure, the ragù was a success and it was vindicated when paired with properly cooked noodles and delicious melted cheese.  This is a great dish for the weekend or if you are stuck indoors surrounded by snow.  If you were are like Obed and have an aversion to lamb you can easily substitute it with beef tips or even maybe some yummy short ribs.

Preheat oven to 325°F. Heat oil in heavy large ovenproof pot over high heat. Sprinkle lamb shanks with salt and pepper. Add to pot and brown on all sides, about 12 minutes. Transfer lamb shanks to platter. Add onions, mushrooms, carrots, celery, garlic, thyme, rosemary and crushed red pepper to pot and sauté until vegetables are tender, about 8 minutes. Return lamb to pot. Add wine and boil until liquid has evaporated, about 6 minutes. Add 3 cups beef stock and tomatoes to pot; return to boil.

Cover pot, transfer to oven and bake until lamb is tender, about 1 1/2 hours. Using tongs, transfer lamb to large bowl. Cool 10 minutes. Cut meat off bones into generous 1/2-inch pieces (discard bones). Return meat to sauce. Season to taste with salt and pepper. (Can be made 1 day ahead. Refrigerate uncovered until cold; cover and keep refrigerated. Rewarm over medium-low heat before continuing.)