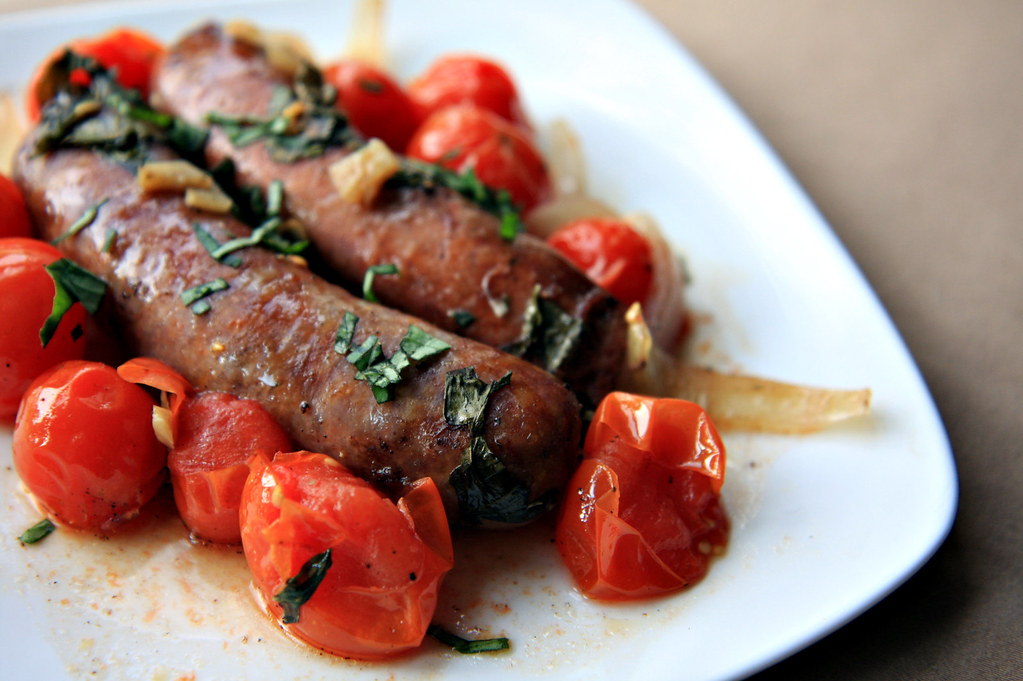 Sundays are usually my biggest cooking days, it is how I “rest”.  Although now the summer is here and my kitchen has no exhaust system, so I am sweating like a piggy in my kitchen.  Especially if I am using the oven.  Although pigs don’t sweat so um…. yeah, maybe like a dog?  Well this was an oven roasting recipe and my kitchen felt like an inferno.  Opening the windows does very little because it is so stinking hot outside.  The kitchen has a ceiling fan, but it blows the flame on my gas stove and just swirls around hot air.  It doesn’t really cool off.  Oi, vey!

Anyway, Sunday after church I sent out a text message to several off my friends asking if they wanted to let me feed them and maybe play some games.  I am telling you, if you offer people food they become your best friends.  😀

Also on a side note, can I express how much I LOVE and appreciate text messaging.  You can contact a group of people all in one shot and never have to speak a word on the phone.  Considering I am not a fan of phone chat, I believe this invention was created just for me.  I LOVE, LOVE, LOVE text messaging and HATE voicemail.  You are better off texting me then leaving me a message.  My friends are fussing at me all the time because I have a 3 to 7 day turn around on voicemail. 😀

Ok back to the food.  I can take no credit for this recipe.  I found this on Kayotic Kitchen.  I starred it as soon as I read it on my Google Reader.  Her pictures are just so beautiful that I wished I could reach through my computer monitor and eat it.  It is a perfect dish to make for guest and it requires minimal work.  You basically throw it together and toss it in the oven.  It was delicious, the tomatoes were perfectly sweet and the balsamic vinegar give it a great little tang.

I served this dish with toasted garlic bread and a zucchini parmesan crisp, which I will be posting later.   I would highly recommend giving this a try and keeping it in your recipe box to make again and again.  I got a symphony of Mmmmmm’s and Yums from my guests and hubby.  Also the best part is that I got to use the fresh herbs from my new little window box herb garden.  Which I will also be posting about in the future.

Now let me give you a tour of this delicious recipe. 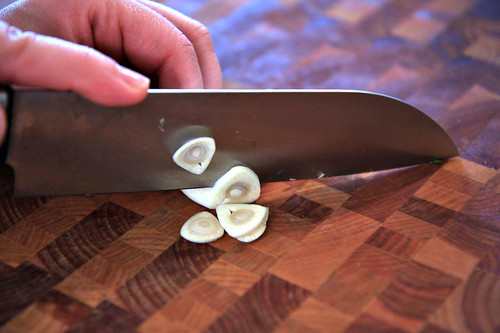 Take 2 small onions and cut them into quarters.  The recipe called for red onion but I didn’t have any on hand, so I used yellow. 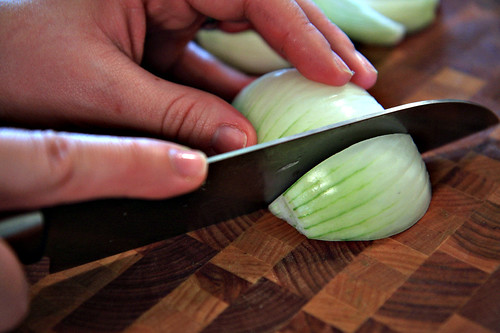 Sprinkle the onions and garlic over the sausages. 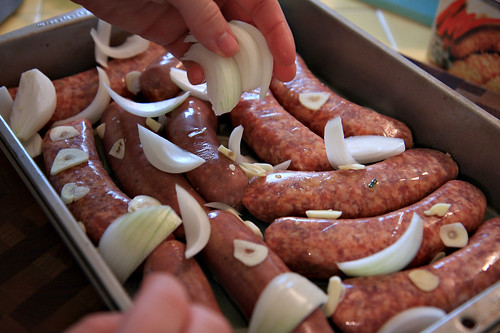 Drizzle 4 Tbs of olive oil over the sausages 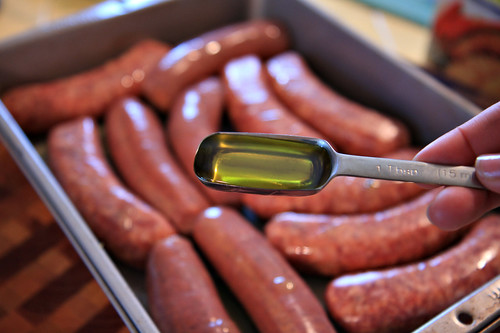 Season with salt and pepper and using your hands mix them around making sure that the sausages are coated with the olive oil.  Bake in the oven at 350 degrees for 15 minutes. 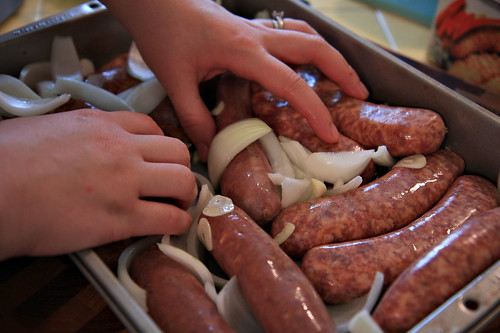 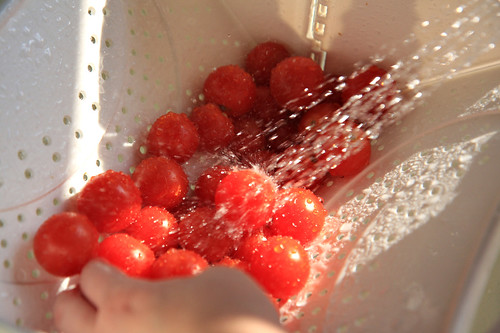 Remove your sausages from the oven and toss in the tomatoes. Try and get them as snug between the sausages as possible. 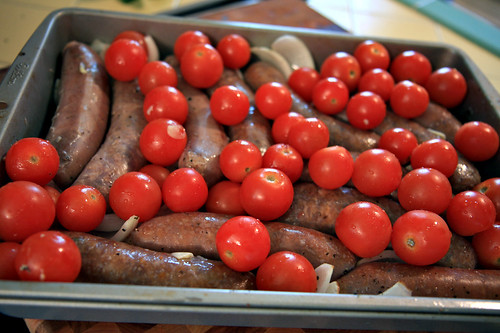 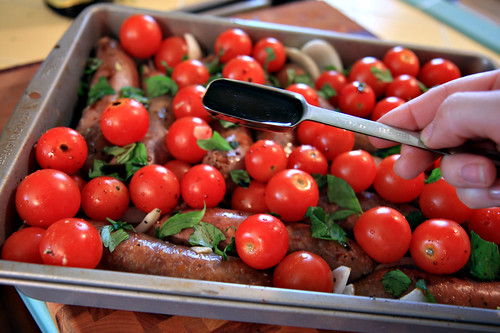 In Kay’s recipe she tore the basil and added it at the very end, which I wish I had but I wasn’t paying attention.  At this point my company was already here and I was cooking, shooting and talking all at the same time. 😀 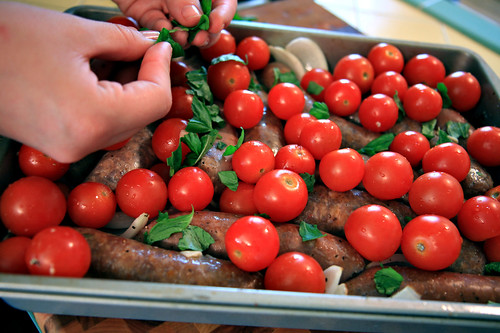 Roast the sausages in the oven at 350 degrees for another 15 minutes or until the tomatoes are soft and juicy.  Remove from oven and serve hot with bread.  It’s that easy!  Mmmmmm 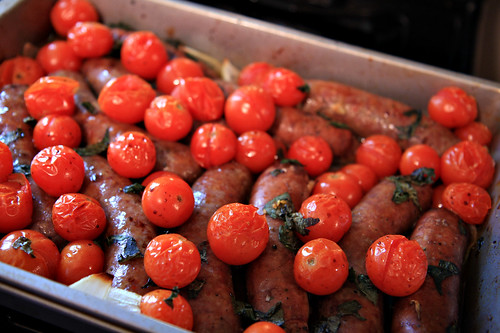 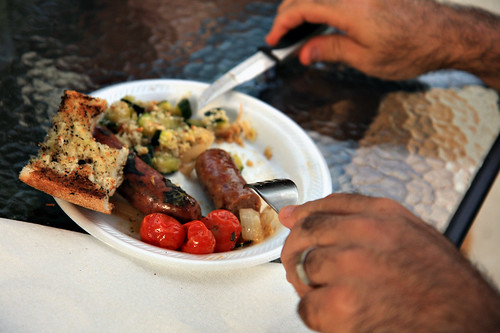