Home » My AncestryDNA: A Story of Puerto Rico 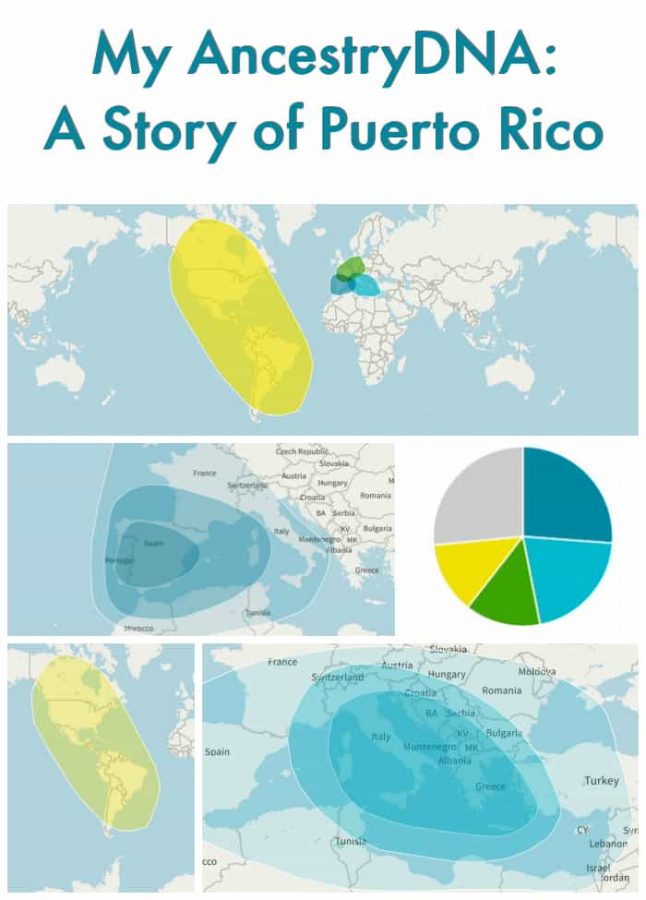 I am a nerd. Specifically a history nerd. When I was a kid I would immerse myself in history, civics and social studies. And, I still love history. I am a chronic googler and historical documentary watcher. So, it stands to reason that I also have an interest in genealogy. Over the last few years, I have been tracking my genealogy through Ancestry.com. For those of you who don’t know, I am from Puerto Rico. And for a time, I was only able to trace my genealogy back to 1910 because that was the first U.S. Census that was taken in Puerto Rico. Now with the newest release of Puerto Rico’s birth, death and marriage records dating back to 1885 I have been able to track my genealogy as far back as approximately the 1790s! So far everyone is still in Puerto Rico but I am looking for that connection to Spain. 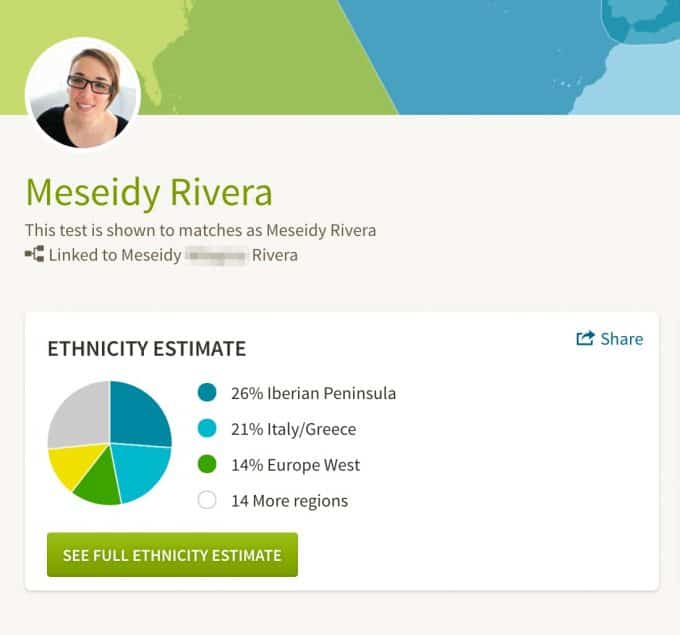 Because of my fascination with genealogy I wanted to take it to another level and decided to submit my DNA to AncestryDNA. I discovered much of what I expected and discovered a few surprises. Before I go through the breakdown let me give you a quick history of Puerto Rico. Puerto Ricans are a make-up of several different ethnicities, specifically Spanish, African, Taino (Puerto Rico’s Natives) and Morrocan. We will all have different percentages of these ethnicities but, we will share most if not all of them. If you would like to know your story with AncestryDNA get your DNA kit here!

HOW ANCESTRY DNA DETERMINES YOUR ETHNICITY

AncestryDNA is a kit that you purchase, and comes with a vial where you provide a saliva sample and ship back for testing. You are provided with a unique code to activate your kit and track your sample. It takes 6 – 8 weeks to process your sample. In laymen’s terms or how I best understand it, AncestryDNA tested individuals in regions that have descendants that can be traced back hundreds of years within that region. They then take your DNA and compare it to those individuals and estimate a percentage of your ethnicity. Learn more about the science behind AncestryDNA here.

My DNA tells me that I am 70%  European, being made up of 26% Iberian Peninsula (Spain & Portugal), 21% Italy/Greece and 14% Europe West which includes France. I am also 13% Native American, and 13% African. I also have trace amounts of West Asia (Middle East) and Irish.  Keep all of these little bits in mind as I take you through my report because not only will you see my DNA makeup but, also the history of all of these regions and how people migrated through history. 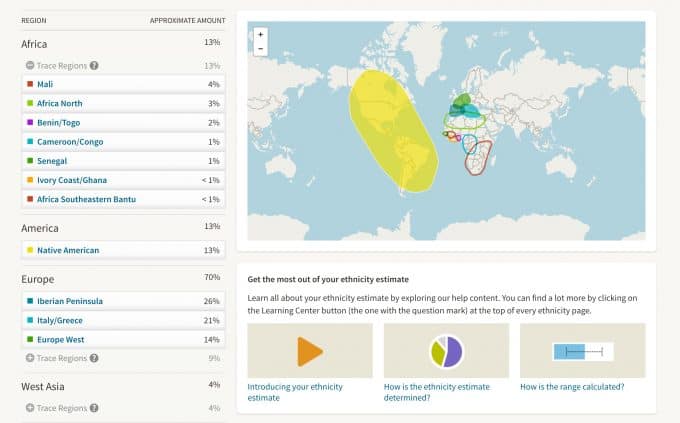 Of course, I suspected that I would have DNA that would be traced to the Iberian Peninsula. If you know anything about Puerto Rico’s history you know that the Spanish started colonizing the island in 1493.  The people native to the Iberian Peninsula have similar DNA profiles from other nearby reasons like France, Morocco, Algeria and Italy. According to AncestryDNA, approximately 51% of the typical native’s DNA comes from this region.  When compared to the typical native which shares 51% of the same DNA I have 26%. 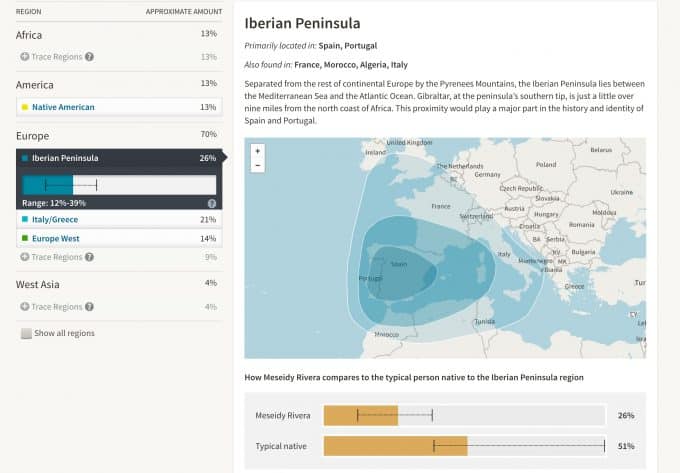 The report also provides you with the regions natives of the Iberian Peninsula share DNA. Notice that Italy/Greece, Africa North, Europe West and Native American are listed. All of which were found in my DNA. 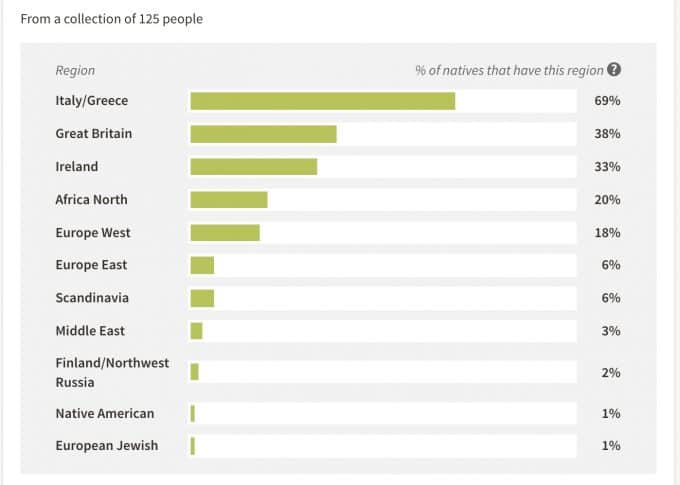 Initially, this one surprised me but then when I looked at the map and saw who it overlaps with the Iberian Peninsula and North Africa it made sense. You have to remember that DNA not only tells you what ethnicities you’re are made up of but, it will also reflect people’s migration patterns through history.

The native people from this region also share similar DNA profiles from surrounding areas, including Spain, Portugal, and France, however, the typical native shares 71% of their DNA.  When compared to the typical native I share 21% of my DNA with them. 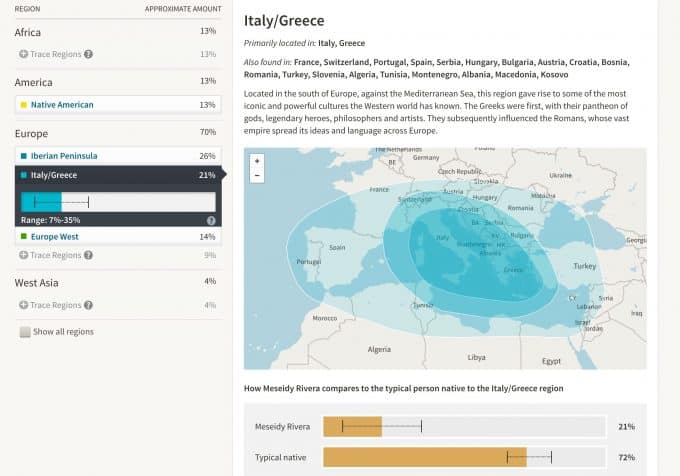 When tracing my genealogy I found that my 4th-great-grandmother’s last name (Feliciana Donis), has French origins! This was the first non-Spanish name to show up in my family tree.  When I got my report back and saw that I may have a little French in me it made sense! Also note that this region overlaps with the Iberian Peninsula and Italy/Greece. 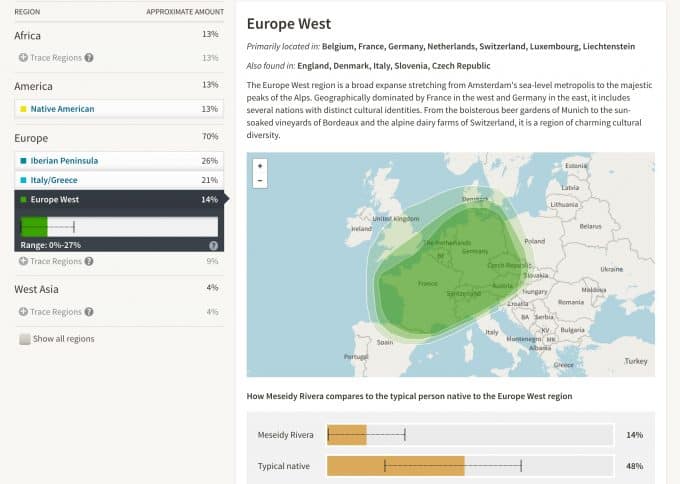 Most of us who live in the United States hear Native American and automatically think of the Native Americans of the United States but, Native American includes the natives of all of the Americas. Before the Spanish colonized Puerto Rico the island was inhabited by the native Taínos which are the Arawak people who migrated from South America to the Carribean. Unfortunately, with the arrival of the Spanish, the Taíno population went from the thousands to less than 500 due to infections diseases, warfare and enslavement. The Spanish also took on Taíno women as common-law wives and sadly sexual violence against the Taíno women by the Spanish was also common. 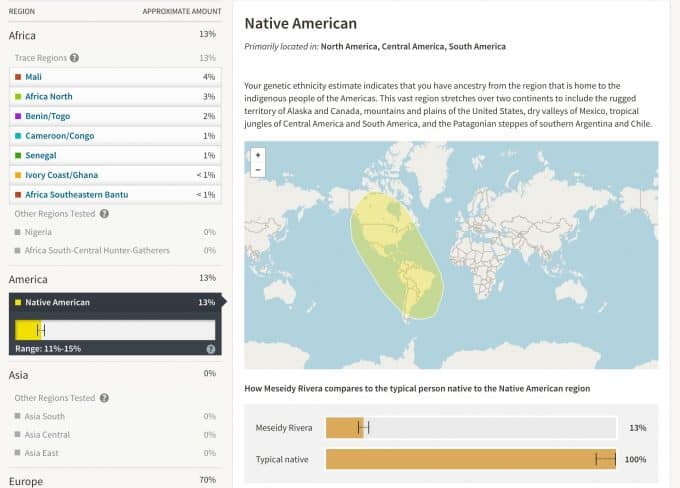 With the decline of the Taíno population, the Spanish brought over Africa slaves in 1513. The majority of my West African DNA comes from Mali, which is only 4%. It also includes trace amounts of Benin/Togo, Senegal, and the Ivory Coast/Ghana. There are also trace amounts from other regions of Africa, Cameroon/Congo and Africa Southeastern Bantu. 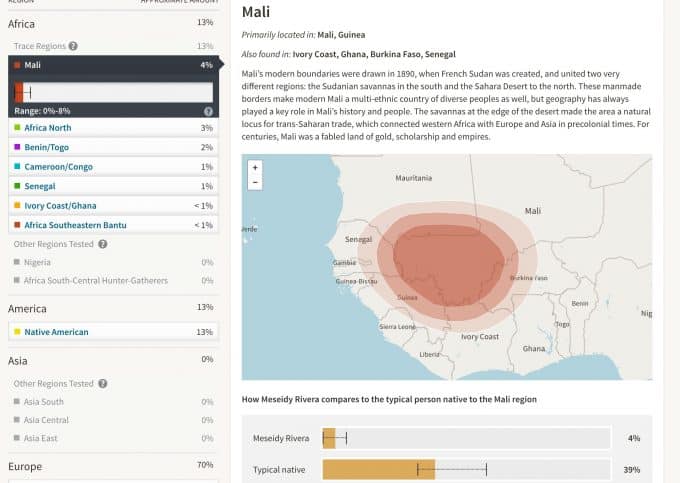 From coast to coast Spain and Morocco are around 40 miles apart. The further south you go in Spain the more influence you see from Morocco. Throughout the 6th century, much of North Africa was under Arab rule.Which probably explains my 4% DNA from the Middle East. Then in the 8th century, nearly all of the Iberian Peninsula was conquered by largely Moorish Muslim armies from North Africa. After centuries-long battles, the Spanish took the peninsula back from the Moors. This time is referred to as the Reconquista. 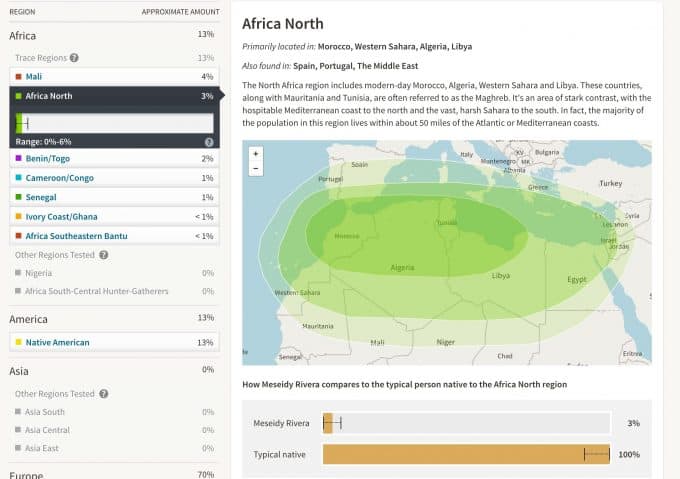 I also have a tiny bit of traces from Ireland 6%, European Jewish 2%, Great Britain < 1%, and Europe East < 1%. I’ll admit I was surprised by the Irish DNA. I guess at some point some Irish descendants made their way to Spain?

It’s just fascinating to see through my DNA the story of how my family made its way to Puerto Rico. Within my DNA I see the battles of the Moors and Spanish, the migration of people of the Byzantine Empire, the colonization of Puerto Rico by the Spanish, my French 4th great-grandmother and the sad history of the Taíno and African Slaves.

AncestryDNA gives you your ethnicity profile but if you give them permission they will also compare it to other AncestryDNA users to find potential relatives. According to AncestryDNA I potentially have 6000 3rd and 4th cousins. Of course I don’t expect to find the connection but it’s cool to know. They also have DNA circles which are connections through people that you have in your tree. I didn’t have any DNA circles but as they continue to add people I could potentially make a connection.

If you would like to know your story with AncestryDNA get your DNA kit here!