Home » Where the Wind Comes Sweeping Down the Plain… 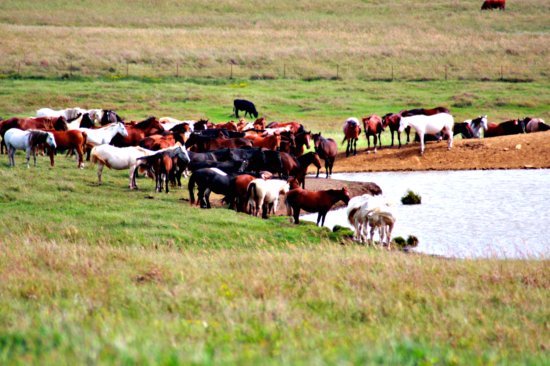 If you watched Throwdown last night between Ree (a.k.a The Pioneer Woman) and Bobby Flay, it is likely that you also saw my mug making it’s first appearance on national television.  I can’t really begin to describe the amount of anxiety that it brought on, but that is not what this post is about.

As I had mentioned before Ree had contacted me through direct message inviting me out to the lodge for a special event.  I promptly began to blow up my husband’s phone with text messages. I then emailed Ree asking if it was ok to bring a friend.  When I got the all clear Obed and I jumped in the car and went over to my friend Laurie’s house.  I thought about calling her but I thought an in person invitation would be more fun.  Laurie loves all things Pioneer Woman and I really wanted to see her reaction in person.  She did not disappoint.  First she was silent with shock and then we promptly began jumping up and down.

After 3 long weeks the day had finally arrived.  On September 21st at 9:30 am we hit the road and headed out to the ranch.  Driving on to her property down the long gravel road was surreal.  We came up on a little pond surrounded by wild horses.  It was beautiful and looked straight out of a movie.  We began to approach the buildings and my husband was very excited to put the Envoy into 4-wheel drive to go through a small creek.  We drove by Cowboy Josh hitching a trailer and he tipped his hat to us.   Then George, PW’s yellow lab, ran out in front of the car to check us out.  George gave us the all clear and we headed up to the lodge.

We arrived 30 minutes early and were greeted by another of PW’s dogs, the very sweet and enthusiastic Hooker.  The view of the rolling hills and prairie from the lodge was impressive.  The sun was out and a cool breeze was blowing. I thought I could hear the theme song of “Little House on The Prairie” playing in the background.  There was snacks and wine out for us to nosh on while we waited.  My husband, the social butterfly, quickly made friends.  I slowly began to meet people and fellow bloggers like Vivian, Elizabeth and Jennifer.

The time finally came for us to make our way into the lodge.  Mind you at this point we still had no clue exactly what was going on.  There were probably close to 70 people there.  When we walked in there were lights, cables and cameras everywhere, it was kind of daunting.  We were ushered in and told to stand behind the yellow line.  We did as we were told and some TV dude came out to “pump” us up. We were taught how to oooh, aaah and cheer.  It was a little goofy but still fun.  It’s incredible to see all the action behind the scenes.

Finally the time came for Ree to make her appearance.  When she came out everyone cheered.  She was sweet and hospitable.  Looking fabulous in her billowy floral top and cowgirl boots.  Ree said hello to everyone and quickly made fun of herself and her nerves.  She introduced her wingladies, Missy and Hyacinth and her cooking demo began. After maybe only 10 minutes out of the corner walked out Bobby Flay.  GET OUT!!!  IT”S A THROWDOWN! Obed, Laurie and I looked at each other in complete shock. I was flabbergasted!  CRAZY!

What you saw on TV was only about 30 minutes of time spent in the lodge.  It amazes me how they can take 8 hours of filming and dice it down to 30 minutes.  It was a treat to watch all the action.  But let me tell you, it was hot in that room.  With the ovens running and all the studio lighting I was slowly melting away.  When I arrived my hair had volume and my make up was in place.  Half way through I was a hot, sweaty, melted mess.  But it was all worth it.

Interesting things that happened during the filming.

Finally the cooking was done and PW’s gravy was salvaged.  We got to line up for our food.  I got Flay’s plate first.  I was in love with the stuffing and it had just a touch of heat, but I couldn’t get down with the brussel sprouts.  Don’t get me wrong, they tasted good but they could not replace a heaping helping of mashed potatoes.  Then I got PW’s plate.  Even if she did have some issues with the gravy, I couldn’t tell.  Her dressing was also super delicious and had hidden bits of pancetta in it.  Let me tell you about her mash potatoes!  They were creamy rich heaven on a plate, cream cheese is the secret.   The desserts were neck and neck and I really couldn’t tell you which one was better.  I am a lover of pecan pie, but the pumpkin bread pudding was so wrong in all the right ways.

The time had come for the judges to come and taste the food.  Trisha Yearwood walked in and you could tell that PW was surprised, she had no clue Trisha was going to be there.  The whole room lit up and cheered. That is when my husband turned to me and asked, “Who’s that?”  He knows very little about country music.  During the judging Flay and PW’s razed each other a bit and gave each other the stink eye, all in good fun.  Finally PW was announced the winner and the entire room cheered and erupted into song singing “Oklahoma”.

After is was all over we made our way outside for some fresh air and to cool off.  I plopped myself down on the deck and prayed that I would be able to get back up again.  Then we made our way around the corner and there was Ree standing outside.  She saw me, smiled and called me over to say hi, greeting me with a warm hug.  I introduced Obed and Laurie and we chatted for awhile about the whole experience.  She is just as lovely and genuine in person as she is on her blog.

The exciting day had come to an end and with tired feet and full tummies we made our way back to the big city.  I was exhausted when I finally got home, but I was so excited about the whole experience it took forever to fall asleep.

Ree, I want to say, congratulations on a great show, you looked FAB!  I never had any doubt that you would kick Flay’s tail. Thank you so much for the invitation. It’s an experience that I will remember and cherish for a long, long time.  I am so grateful to have been a part of it.

P.S.  In case you are interested here are the Throwdown recipes.