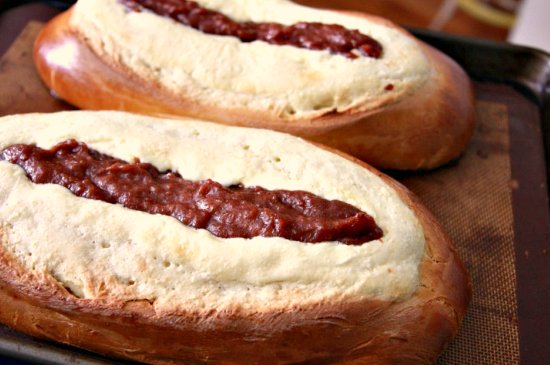 There is a bakery in almost every neighborhood back home in Puerto Rico.  They open bright and early, baking fresh bread every morning.  The smell of fresh baked bread in the morning is a treat that should be  experienced by everyone.

In the morning on the weekends my dad would head out to the bakery for some fresh bread.  Most of the time I would come along.  We usually were going in for just some pan de agua and milk but then I would see pan de queso sitting on the counter wrapped in plastic wrap taunting me.  I would beg my dad for a loaf to take home.  Sometimes I would have my way and we would leave with a few pastries and some pan de queso in addition to the pan de agua and milk.

Earlier this week it hit me.  A deep rooted craving for some pan de queso, but I had no clue where to begin.  I searched for a recipe, but didn’t find one.  All I really needed was a good sweet bread and some cheesecake type filling.  I decided to use the pan de medianoche recipe from 3 Guys from Miami.

First you will need to melt 1/2 a cup of shortening, set aside to cool. 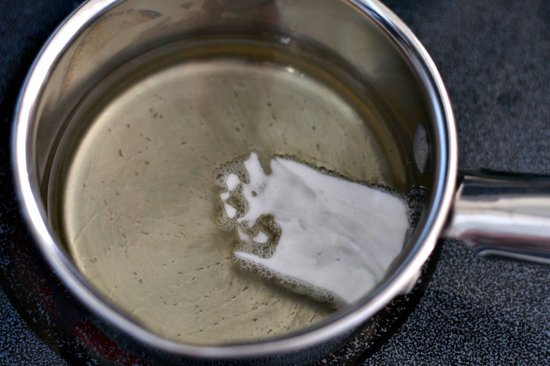 In a bowl combine warm water, yeast and 3 tablespoons of sugar.  Place in a warm place and let the yeast bubble and foam.

If you suffer from a cold kitchen like I do, go ahead and turn on the oven to warm it up. 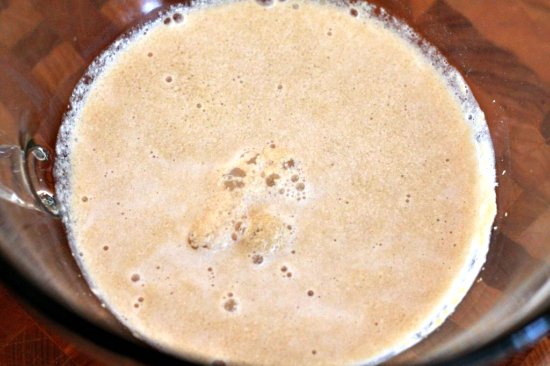 In a mixing bowl add 3 eggs. 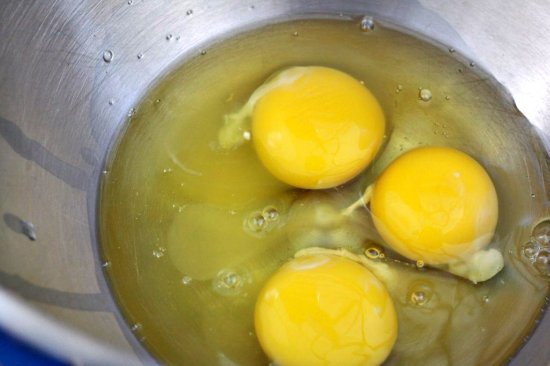 Beat the eggs until foamy. 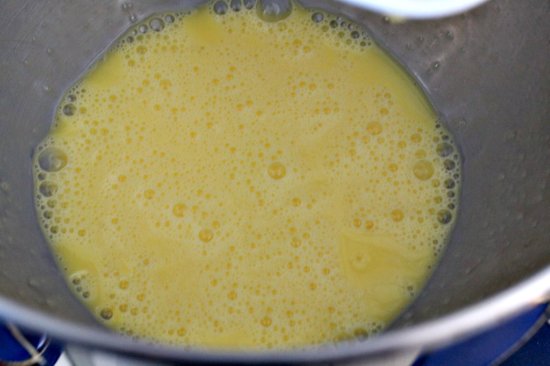 Add yeast mixture, melted shortening and the rest of the sugar to the eggs. 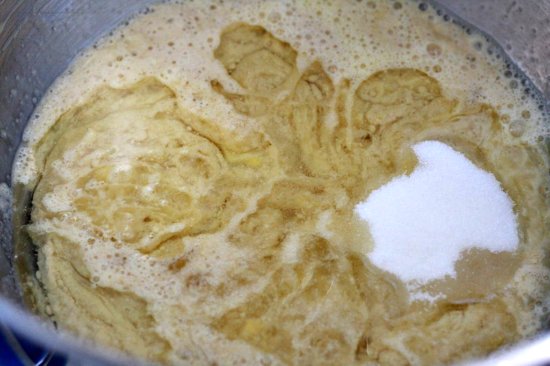 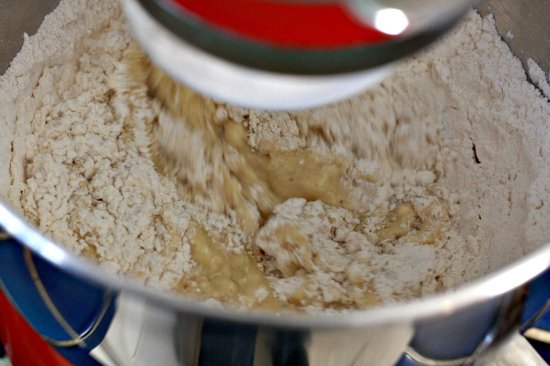 Continue adding flour until the dough pulls away from the sides of the bowl.  Depending on the humidity where you live, you will need more or less flour.   Sometimes I used 4 cups sometimes I used almost all 6 cups.

Once it starts to pull away from the sides, adjust the mixer speed to continue kneading the dough for three to five minutes until the dough gets stiff and pliable. 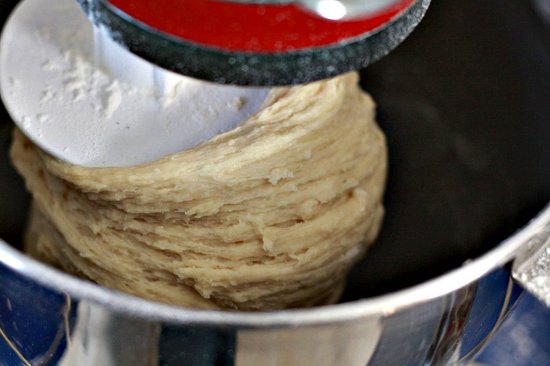 Grease a large bowl and place the dough in it, then turn the dough so that the greased side is up. Cover with a slightly damp, clean towel. Let rise in a warm place for about one hour or until the dough ball doubles in volume.

It will be big, poofy and yellow. 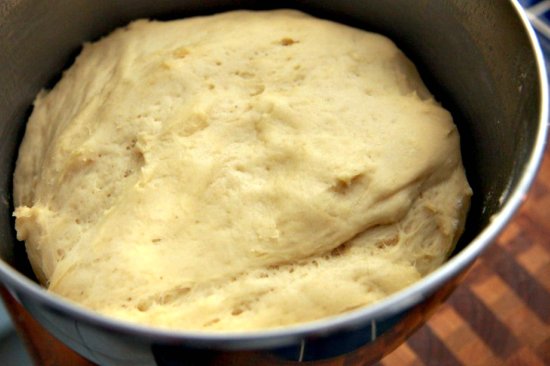 Turn the dough out on a lightly floured surface. 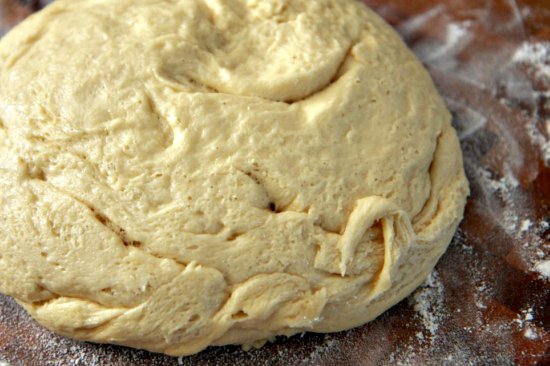 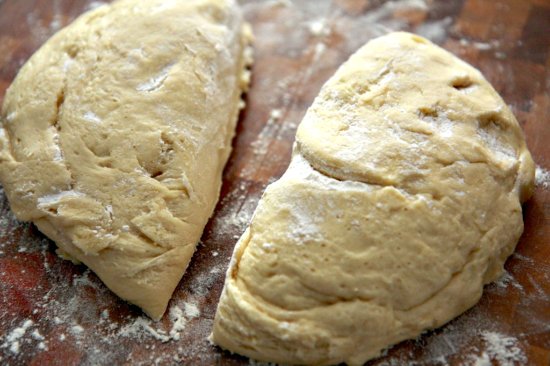 Roll the dough out into two loaves.  About 8 inches long and 3 inches wide, give or take a bit.  Score the dough down the center. 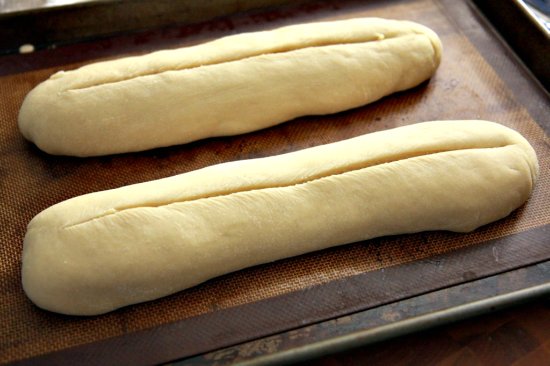 Cover with a clean damp kitchen towel and cover loaves.  Allow the loaves to rise for about 1 hour and double in size.

The scored section should open up.  If it hasn’t opened enough give it a little help by scoring again and nudging it open. 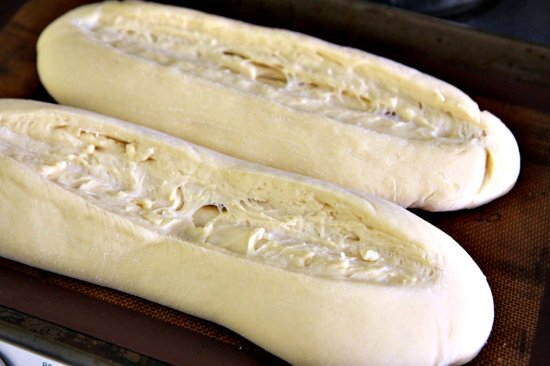 About 20 minutes before the dough has finished rising you can begin to make the topping.

The proper way to make the topping is to beat the first 4 ingredients in large bowl until blended and then beat in eggs 1 at a time. Finally beat in the cream of coconut. 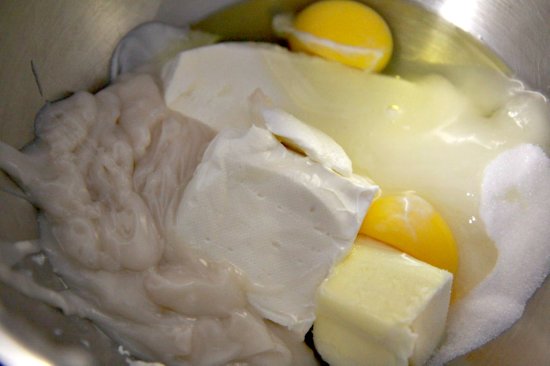 But I was tired and lazy and tossed everything into the bowl at the same time.

Which is why my mixture came out a wee bit lumpy…but I was ok with that.  It still tasted awesome. 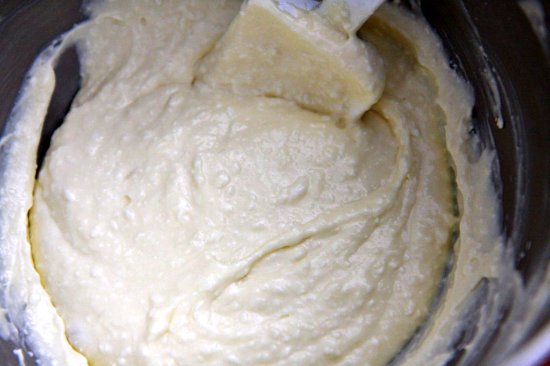 Then I remembered that I had a few cans of guava shells that my in-laws brought to me from Florida. 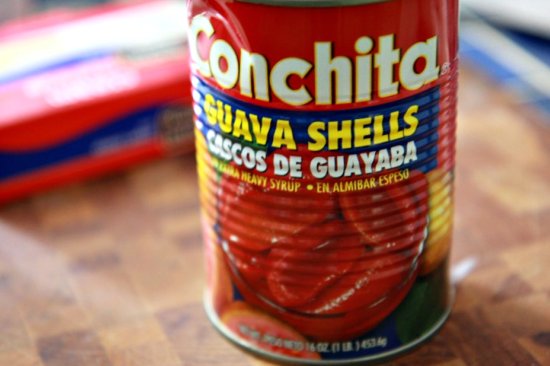 I drained the guava shells and tossed them into the food processor. 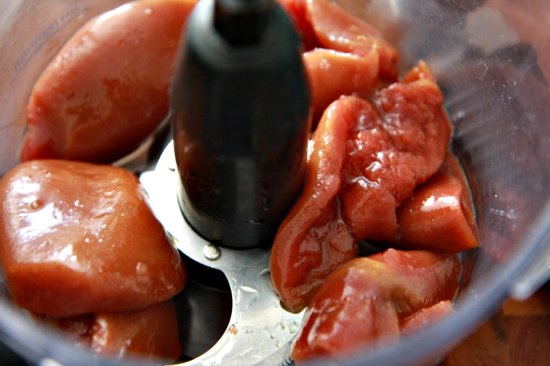 Puree the shells until smooth. 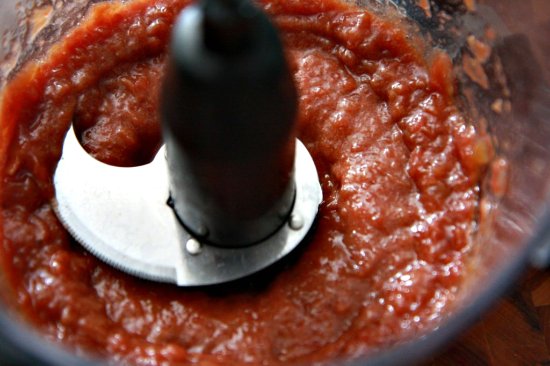 Top the bread with the cheese filling and some guava puree down the middle.

I did have quite a bit of filling left over which I plan to use in some cheesecake tartlets or I could just make another loaf of bread. 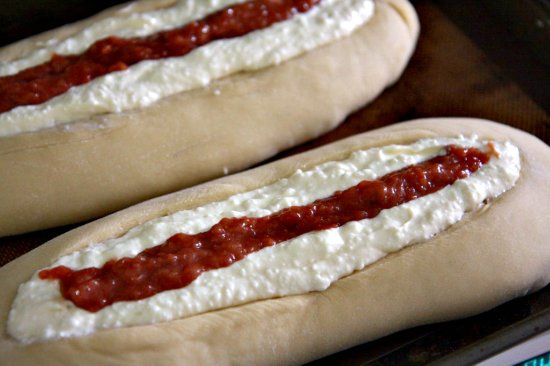 Brush the loaves with egg wash. 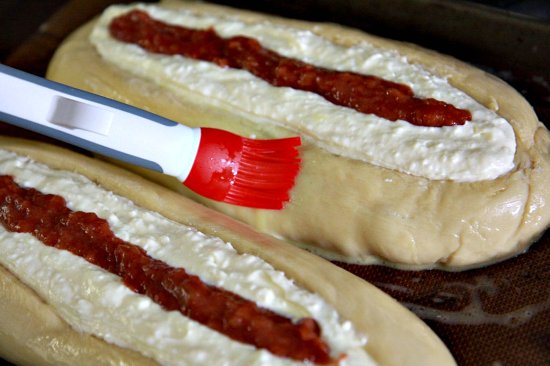 Transfer the bread to a cooling rack and let cool completely before slicing. 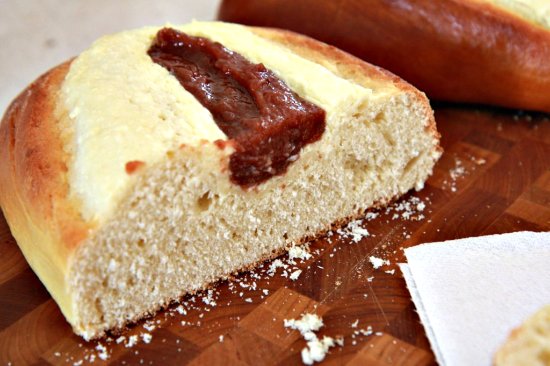 This isn’t the slice that I cut myself….this is what was left after I cut myself a slice.  What can I say I am weak and this was delicious. 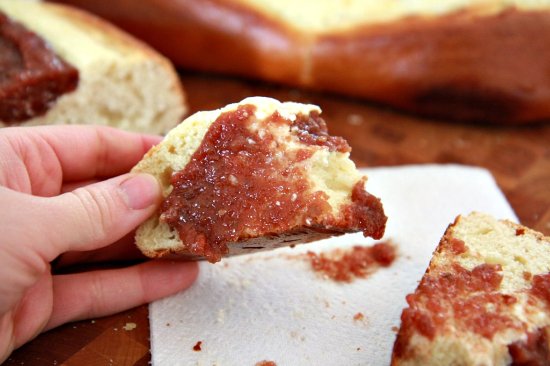 Obed declared this the best bread I had made so far and I would have to concur.  One of the best parts of this bread?  Not only is it sweet and cheesy, but it has fruit spread built in.

The recipe below is how I prepared it, but you could probably half the filling since it’s more then what you need for the bread.   However if you want you could use the same “topping” to make some mini cheesecakes and swirl in the left over guava puree.

In a large bowl, mix yeast and three tablespoons sugar in one cup warm water. Place in a warm place and wait for the yeast to begin bubbling.

Beat the eggs until foamy. Add the eggs, the rest of the sugar, the salt, and the melted lard to the yeast/water mixture.

Using the dough hooks on your electric mixer, gradually mix in flour. Add flour until the dough pulls away from the sides of the bowl. Adjust the mixer speed to continue kneading the dough for three to five minutes until the dough gets stiff and pliable. Grease a large bowl and place the dough in it, then turn the dough so that the greased side is up. Cover with a slightly damp, clean towel. Let rise in a warm place for about one hour or until the dough ball doubles in volume.

Place the dough on your work surface and punch it down. Divide the dough into two equal parts. Roll each half on a lightly floured surface to make loaves about 8 inches long and 3 inches wide, score each loaf down the center. Arrange loaves on a lightly greased baking sheet. Cover with a slightly damp, clean towel. Let rise in a warm place for about one hour or until the loaves double in volume. The scored section should open up.  If it hasn’t opened enough give it a little help by scoring again and nudging it open.

Twenty minutes before the bread has done rising using electric mixer, beat first 4 ingredients for the filling in large bowl until blended. Beat in eggs 1 at a time. Beat in cream of coconut.  Puree guava in food processor.

Brush the loves liberally with the egg glaze.  Fill the slot on top of the bread with cheese filling and the guava puree down the center of the cheese filling. Bake until golden brown — about 30 to 35 minutes. Remove the loaves from the oven, take them off the baking sheet and let cool on a wire rack. Let them cool completely before slicing.