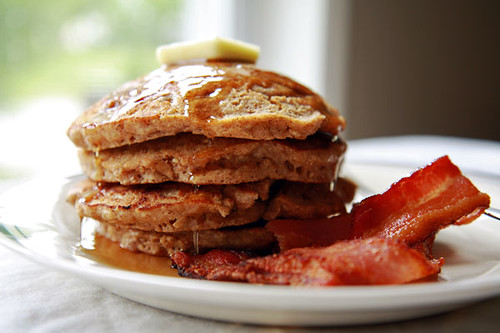 First thing this morning we wake up and Hubby looks at me and says, “I want pancakes”.  Isn’t that sweet? LOL  Of course I can’t just make some plain old pancakes.  I noodled on it for awhile and then I remembered the  Nut and Grain pancakes at IHOP that I love.  I am not a fan of the standard buttermilk pancakes so I always order Nut and Grain pancakes.

This morning I figure I would give it a go and make my own Nut n’ Grain pancakes.  I went into the kitchen to experiment with the pancakes, while Hubby watched Under Cover Brother, he was laughing the whole time.

These were super yummy and they came out really thick, even though they aren’t extrememly heavy.  When Hubby saw them he called them hamburger pancakes because they were so thick.   They were delicious and I love the texture.  You could taste the oats and the nuts gave them just a bit of a crunch.  I served them with some thick bacon that we got from Perry’s Food Store, which was awesome, and drizzled them with maple syrup.  I recommend you give them a try.

Place oats in food processor and pulse, about 7 times. You want them to break up, be careful not to over process.

Combine all ingrediants into a large bowl and stir until well combined.

Melt a Tbs of butter on the griddle and spread out. Using a ladle or 1/4 cup pour batter. Making pancakes about 3-4 inches in diameter. (these pancakes get think you man not want them any bigger.) Watch for the tops to bubble. Turn pancakes and cook until golden on the second side.