About two years ago, OB and I were sitting on our couch watching TV.  I am sure it was one of our less productive days.  A trip or two to the kitchen for snacks may have occurred.  While we sat there, being as productive as we deemed necessary, OB came across a show about barbecue.  I listened half heartedly, but it had OB’s full attention.  By the end of the show, OB looks at me and says, “I want to go to Lockhart.”   I don’t remember which show it was, what I do remember was that it was about Lockhart, TX and their barbecue, real primal Texas BBQ.  OB’s eyes were wide open as he sat at the edge of the sofa enthralled by the images of tender smoked brisket and pink juicy ribs.   He bookmarked Lockhart, TX on his phone map with dreams of future road trip.

The city of Lockhart, TX is about 45 minutes outside of Austin and has been named the barbecue Capital of Texas.  There are four barbecue restaurants in Lockhart.  The restaurants estimate about 5,000 people visit each week, which is approximately 250,000 people a year who come to Lockhart to eat barbecue.   The four barbecue restaurants in Lockhart are Black’s BBQ (215 N. Main St.), Kreuz BBQ (619 N. Colorado St.), Smitty’s Market, (208 S. Commence) and Chisholm Trail BBQ (1323 S. Colorado).

Obviously since it was one of OB’s dreams to try Lockhart, TX barbecue we planned a visit while we were in Austin.  If it had been up to us we would have tried barbecue from all four of the restaurants, but since we only have one stomach each we had to settle for just two.

Black’s BBQ was our first destination, established in 1932, it is one of the oldest barbecue restaurants in Texas that has been continuously owned and operated by the same family.  Black’s has been making barbecue for 80 years logic dictates it has to be good. 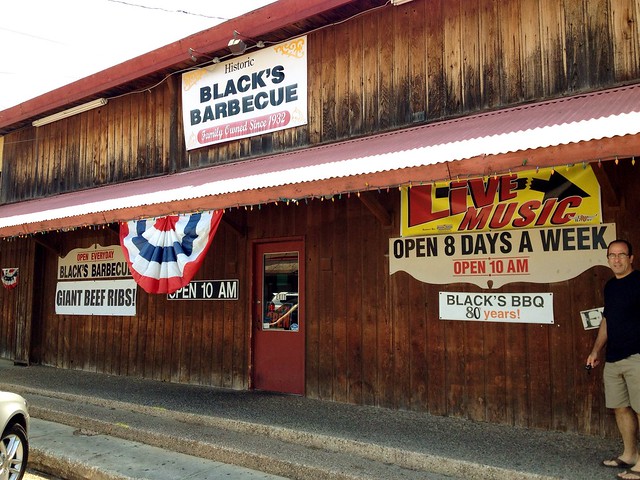 From the outside, Black’s BBQ looks like smoke, with its weathered wood panel exterior.   It beckons you to come in with promises of giant beef ribs triggering images of Fred Flintstone’s lunch of Brontosaurus ribs. 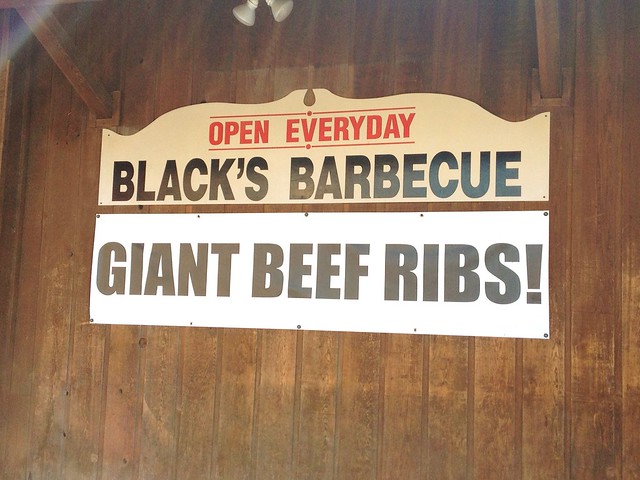 When you walk through the door, the smell of smoke meat permeates the air.   Much like the cow your about to feast from you are corralled down a buffet line of side dishes and desserts.   They have everything you would typically find at a family barbecue, corn bread, pinto beans, blackeye peas, potato salad and a choice of local brews to help wash down your barbecue.  Turn the corner and there’s a kind man with a big knife and a scale.  “What can I get for you?”  In the most typical Texas accent.  I order a slice of brisket and a St. Louis style rib.   He pulls a whole brisket and rack of ribs out of the smoke pit behind him and slices into them.  Originally Black’s was a meat market, holding true to tradition they still sell their meat by the pound. 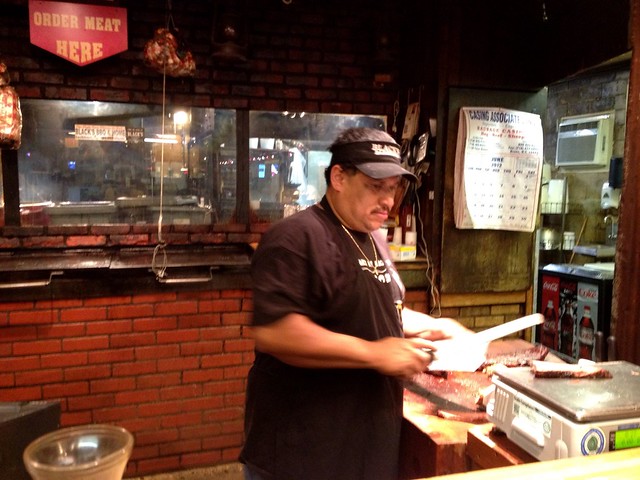 The dinning room walls dripped with nostalgia, speckled with family memorabilia and accolades of over four generations of barbecue. 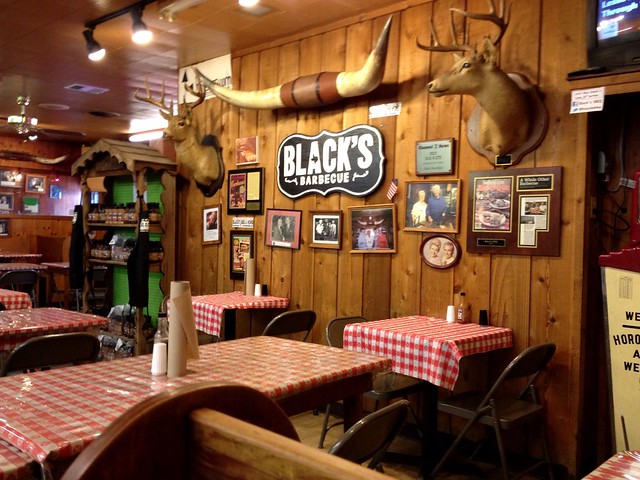 We picked our seat in a booth and made our plan of attack.  OB being a sucker for sausage had ordered a sausage link and a slice of brisket. 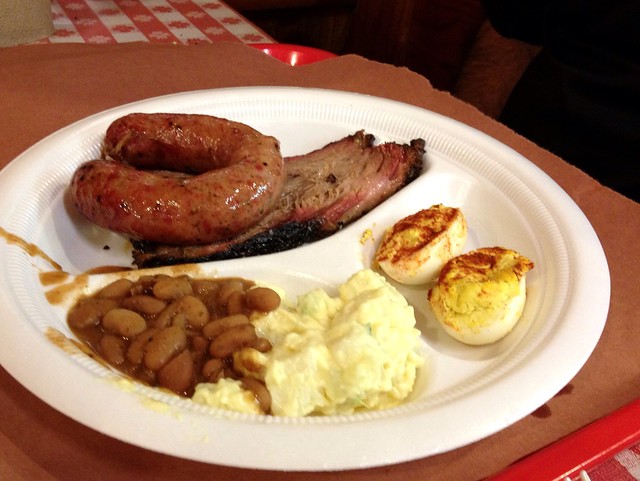 Before I go on I must confess, I am not a fan of beef barbecue.  It’s not that I think it’s bad it’s just that I grew up on pork, and I have never come across a beef barbecue that could stand up to the tender juiciness of pork.  Time and time again I have heard people go on and on about tender fall apart brisket, yet every brisket I tried I felt required too much effort to chew, especially when compared to my tender delicious pork. 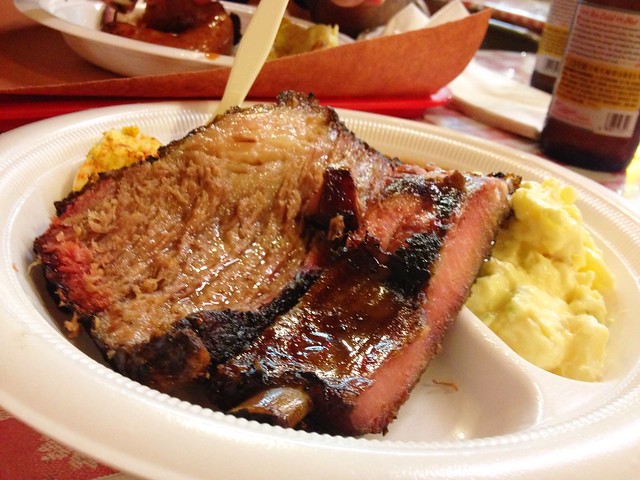 This brisket converted me, it fulfilled every rumor I had ever heard about what brisket should be.  It was tender juicy meat butter.  Full of flavor from the spices, with a touch of sweetness and just the right amount of smoke.  I had tried brisket time and time again always disappointed and left wondering what I was missing.  I had finally been converted to the church of brisket, and I welcomed it with open arms – or mouth in this case. 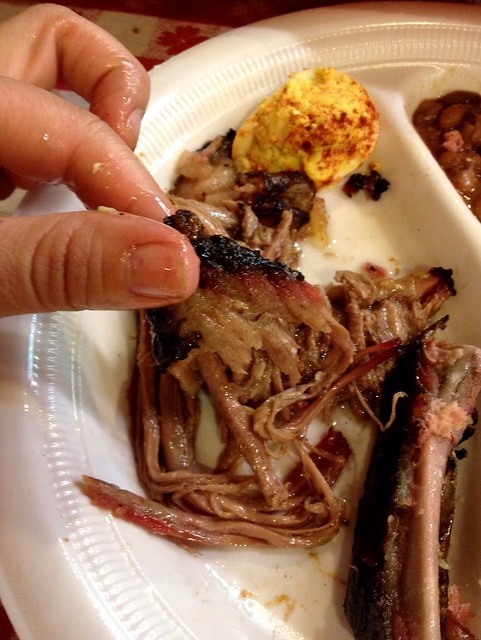 As I sat there licking my fingers, and savoring every last piece of meat butter on my plate I saw stacks of boxes coming from the back room.  I have good news for you folks you don’t have to drive all the way out to Lockhart, TX for Black’s BBQ you can order it online and have it shipped to your door. 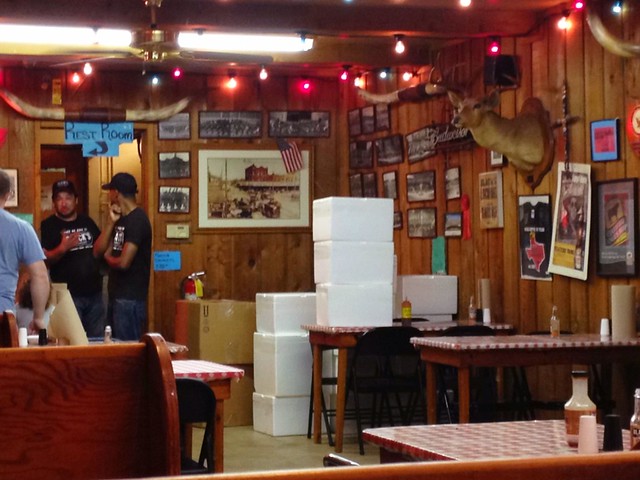 OB and I sat there for a while reflecting on the magnificence of our lunch – of the brisket – of the meat butter we had just had the privilege to enjoy.   We also sat there gauging the amount of space that remained in our stomaches trying to determine if we were able to move on to our next stop.  We came to the conclusion that even if the room in our stomachs was limited we had a duty to fulfill.

We headed over to Kreuz Market, a huge facility that you can see right off U.S. 183, seriously you can’t miss it. 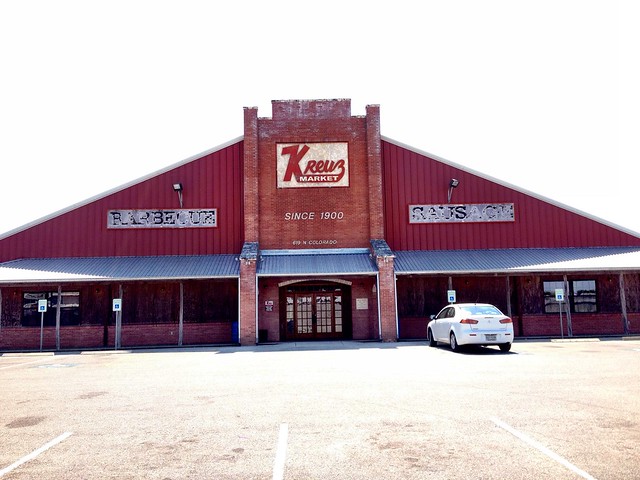 Kreuz Market was established in 1900 by Charles Kreuz as a meat market and grocery store it stayed in the family until 1948 when an employee of Kreuz Market, Edgar Schmidt bought the market.  In 1984, Edgar sold the market to his sons Rick and Don.  The brother’s ran the restaurant together until 1997 when Don retired and in 1999 Rick moved the restaurant from its original home of 99 years to a larger location just down the road. 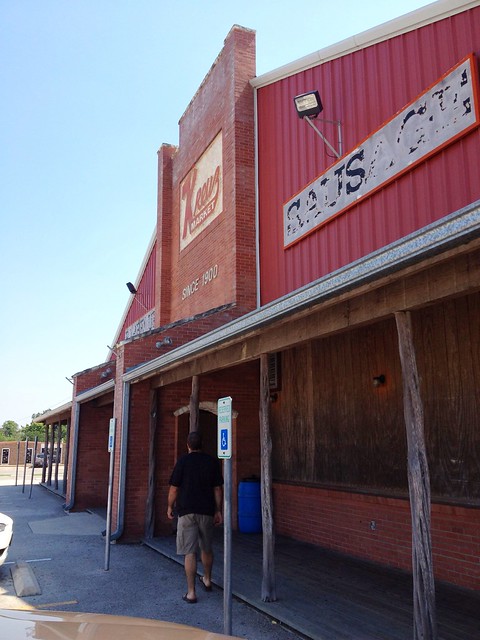 Walking into Kreuz can only be described as an experience.  When you walk in you are immediately hit by the smell and heat of smoked meat. 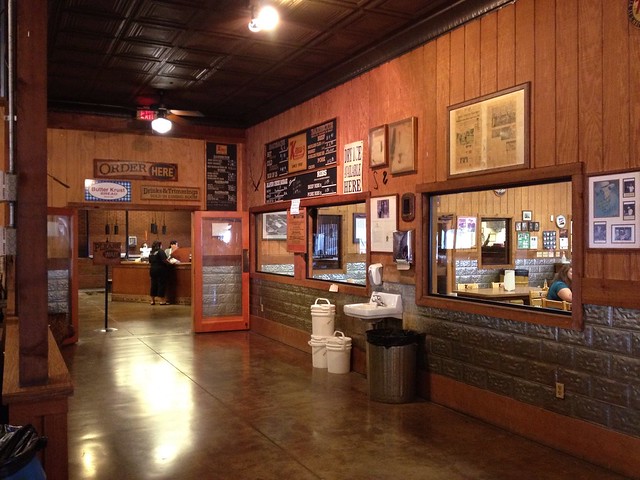 The walls are covered with market’s history and signs of carnivore pride. 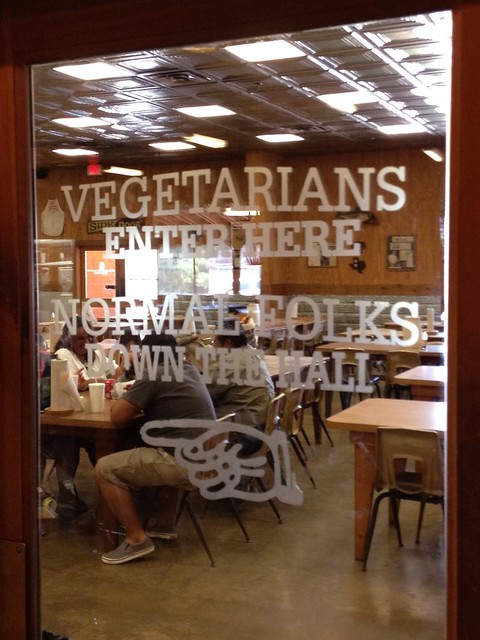 There are lessons on Kreuz traditions, no sauce, no fork, no salad, no credit, no kidding. 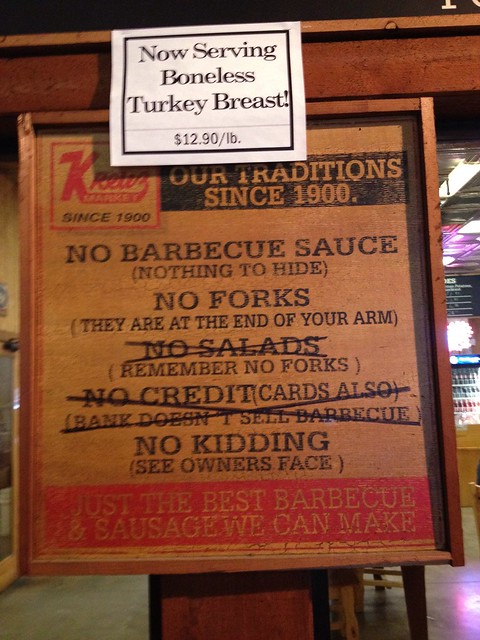 After walking through the entrance, down the hall and through some double doors, the source of the heat is discovered.  A giant room full of smoke pits.  It was like walking though a time capsule.  The room was so utilitarian and purposeful; it was a room for smoking meat, nothing else.  It wasn’t for comfort and as impressive as it was; it wasn’t for show. 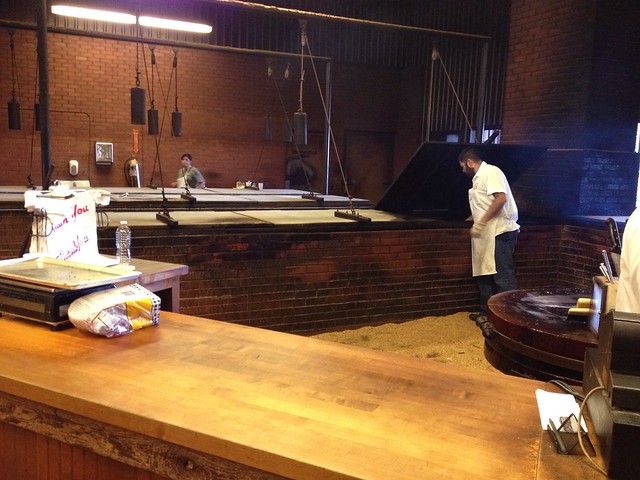 The fire pits lined every wall in the room, probably filled to the brim with brisket, ribs and sausage. Oh my!   If this room had any air conditioning there was no way to tell because the heat from the fires consumed any comfort provided by air conditioning. 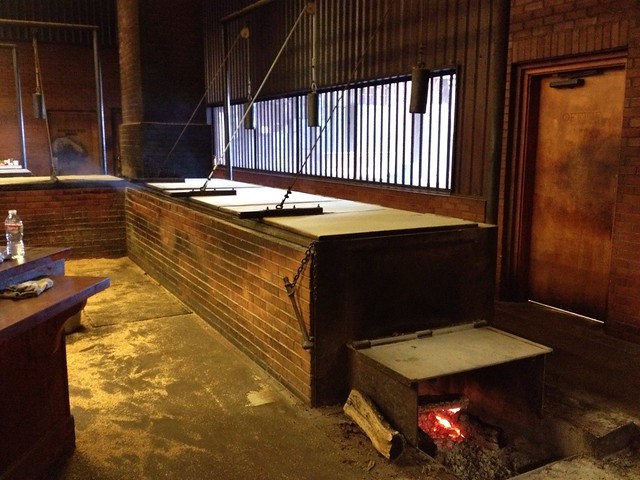 It was time to place our order.  Just like at Black’s, we told the people behind the counter what we wanted.  They weren’t quite as chipper as the gentleman over at Black’s, but I am sure the stifling heat in the room probably had a lot to do with it.    Seriously it was stinking hot in that room, I had been there for just a few minutes and felt my grump getting on. 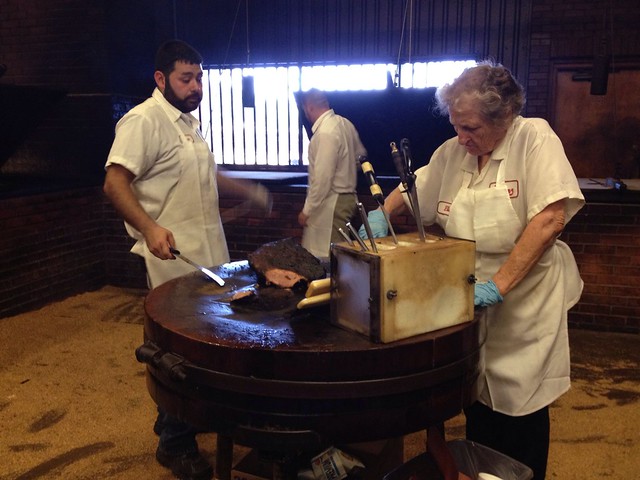 OB and I duplicated our order from Black’s wanting to make a true comparison of apples with apples.  We took our brisket, sausage and ribs through another set of double doors and into a blissfully air-conditioned room.  Here you can order your sides, trimmings and drinks. 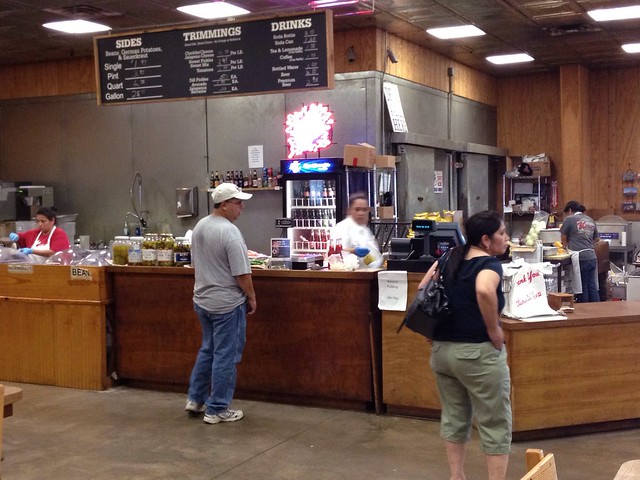 We decided that if we were going to eat at Kreuz we were going to respect the traditions for Kreuz, which means no sauce, no fork, no salad and no plate, just butchers paper and our fingers. 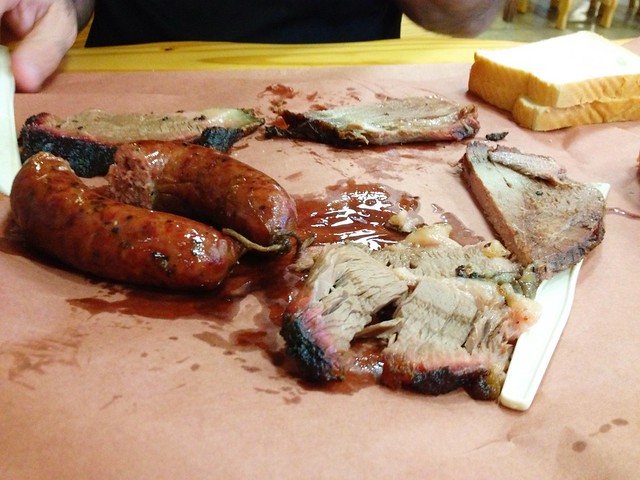 Now you’re wondering what did I think.  Whose barbecue is better?  Maybe I will leave you in suspense and just sign off.  Naww, that would just be mean.

I am going to be straightforward with you, Kreuz was good, but Black’s was better.  The deciding factor was the brisket.  I had to chew Kreuz brisket like every other brisket I have tried, but Black’s was life changing.  Black’s was in the category of meat butter.  Thank goodness they ship their brisket because I cannot imagine my life without it again.  However this does not mean I recommend skipping Kreuz if your ever in Lockhart.  It’s still delicious barbecue and the opportunity to experience their unique dining facility should not be passed up.

Now, my word is not the end all be all when it comes to Lockhart barbecue, so if you ever find yourself for a few days in Austin, take a drive out to the sleepy little town of Lockhart, TX and do a little taste test of your own.