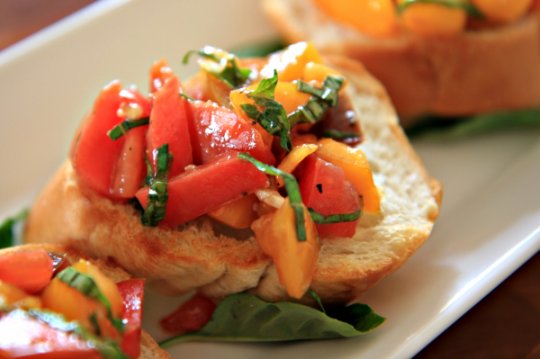 Is everyone excited to be back at the office or school after your long weekend?  Probably no…no worries me neither. The one good thing is that since we had a long weekend, that means a short work/school week. 🙂  I decided to take advantage of my long weekend and do some Spring…..well Fall cleaning. I also did some cooking, baking of course and Obed and I went out for dinner and a movie.    I finally got to see Julie & Julia.  I know I am a little behind but I finally got around to it.  I did enjoy the movie, I found it very funny and charming although I did find the story of Julia Child more interesting and fun then the story of Julie Powers, but it is definitely a movie worth seeing.

If there is one thing I can say about the film is do not go hungry.  I made this mistake.  We had decided to go to an early show and do dinner after the movie.  Seeing all that food on a big jumbo screen was just torture. It took everything in me not to jump up and run down to the lick the screen.  I resisted the temptation assuming that it may be a little disruptive. 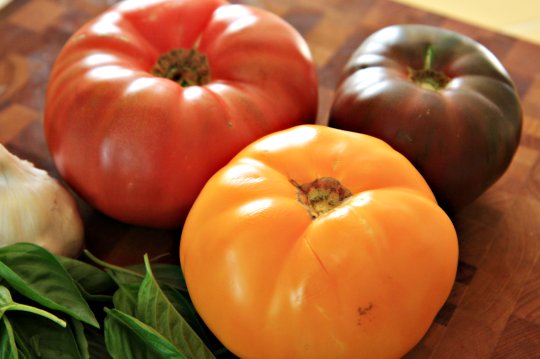 In one scene Julie (Amy Adams) is sitting down for dinner with her husband before she has decided to start the Julie/Julia Project.  She prepares this tray of what I assume is a tomato and basil bruschetta, of all the delicious food in this movie this just jumped out at me.  I think it was because it is the only thing in the movie I knew how to make without having to go and pick up a copy of  Julia Child’s “Mastering the Art of French Cooking”.   Other contributing factors could have been I was starving to the point my stomach was sucking on my spine and that her husband kept repeating how good it was over and over. 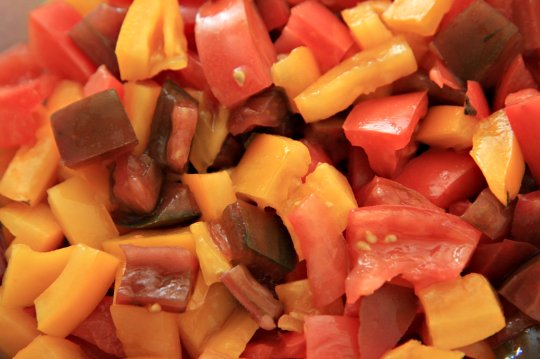 I decided right then and there that tomato basil bruschetta was going to be dinner the next day and of course to appease the carnivore we would grill some Italian sausages.     Granted some would not consider toast and diced tomatoes a meal but I would have been happy consuming every last bit of it, no Italian sausage required.

I confess I did splurge on the tomatoes.  I happen to have miraculously found myself in Whole Foods in front of some beautiful heirloom tomatoes.  Heirloom tomatoes are not cheap when compared to a regular tomato but they are so full of flavor that you have to let yourself splurge once in a while.  This is one of the reasons I put ads on my site so I can splurge on special food items.  You of course can use roma tomatoes instead of heirloom tomatoes.  If you can get different color tomatoes please do, it just looks so pretty. 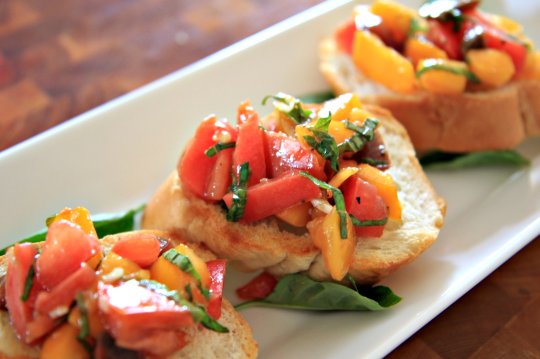 I was in heaven when I ate this bruschetta.   It was loaded with flavor and had just a bit of a kick from the garlic.  The sweetness of the tomatoes were a great contrast with the tangy vinegar.  I would have eaten an entire loaf of bread with these tomatoes.  I think next time I will melt a bit of fresh mozzarella over the toast.

Mmmmm….resisting urge to lick screen.   It is a little dusty it will do me good to not succumb to the temptation.

Slice the loaf of bread, on the bias, into 3/4-inch slices. Place bread in oven on sheet pan and broil until golden brown on both sides, approximately 2 minutes for the first side and 1 to 1 1/2 for second side. Remove to a platter and rub each slice of bread with the garlic and then brush with olive oil.  Using a slotted spoon, top with tomatoes and serve immediately.