Many of you don’t know this but when I was a Air Force brat my family was stationed in Warner Robins, GA.  I spent most of my childhood in Georgia.  Even though I spent many years in Georgia I have never been a big fan of southern food.  Don’t get me wrong I appreciate it and crave it once in a while, but it is rarely my first choice. 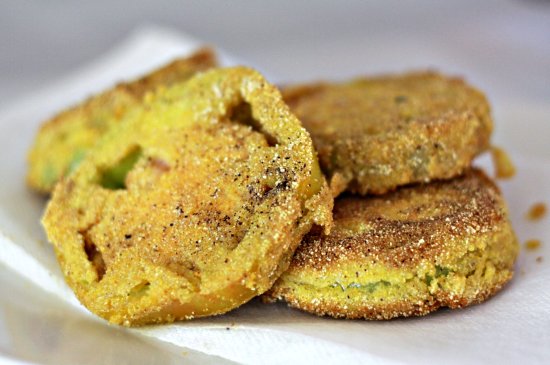 However there is one dish that I fell in love with during my time in George…fried green tomatoes…oh and peach cobbler, but that will be a post for another day.    Oddly enough I haven’t had fried green tomatoes in years…yesterday I decided to put that to an end.

The great thing about these is that they come together lickity-split.  The hardest part about this dish was finding the green tomatoes.  Thanks to a produce stand of a local farmer, I had green tomatoes in hand.

Set up a dredge station with one bowl of beat eggs, a bowl of the cornmeal mix and 1/2 inch sliced green tomatoes sprinkled with salt and pepper.

I did experiment with 1 dredge vx. 2 dredge and I decided that the 1 dredge was better.  Dredging it twice make the coating a little thick and the tomato doesn’t get a chance to soften, so I recommend dredging just once. 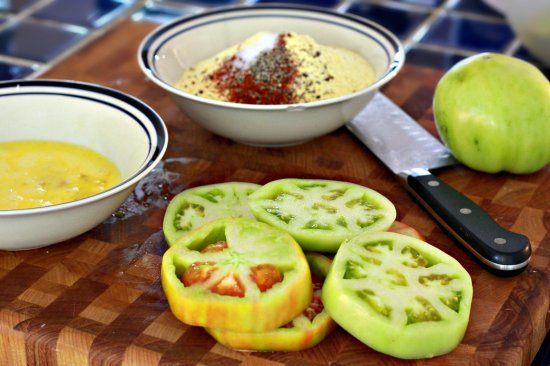 Heat a skillet with 1/2 inch of vegetable oil over medium-high heat.   Fry the tomatoes about 2 min. each side, but do not overcrowd the pan. 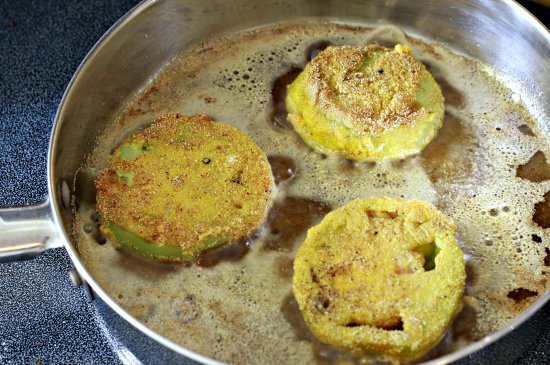 Transfer to a paper towel lined plate and enjoy.

Obed had never had a fried green tomato and although he looked at them suspiciously he tried them and cleaned his plate.  I fell in love all over again and reminisced of the times that my mom, sister and I would order fried green tomatoes at Po’folks.

Sprinkle the tomato slices with the salt and pepper; set aside.

Set up dredging station. Combine the cornmeal and paprika in a shallow bowl. In another bowl, beat the eggs.

Cover the bottom of a heavy skillet with 1/2 inch of oil, then place it over medium-high heat.

Dredge the tomato slices in the egg and then the cornmeal mixture.

Fry as many tomatoes as fit comfortably without crowding the pan, until nicely browned, about 2 minutes a side.

Transfer to a paper towel-lined platter to drain. Repeat until all the tomatoes are cooked.