Buster is a special dog.  He is a character in our home that always keeps things interesting.  He is usually the trouble maker, the instigator, the pain in your tail that is up to no good, but we love him.  Buster has all the personality of a terrier that you would expect.  He has a serious Napoleon complex and bullies Jake around, who is 63 pounds heavier than him.  He always has to be the first out the door, barks at the TV whenever another dog comes on and if anyone even looks at his bowl they are going to get it.  Buster is a character. 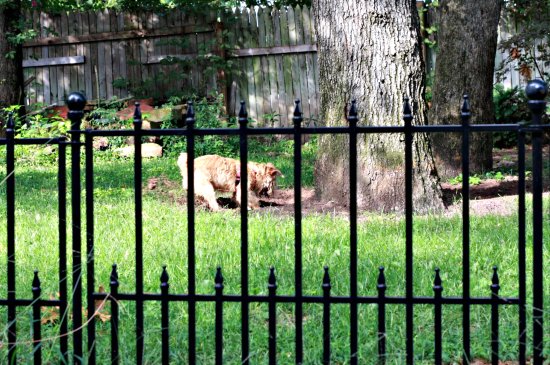 The other day as I sat on the sofa folding a Mt. Everest size of towels.  I heard non-stop whiny barking from the back yard.  I got up and looked out the window to find this site.  Buster was head first in a hole, dirt flying everywhere.  UGH!  Stinking DOG! 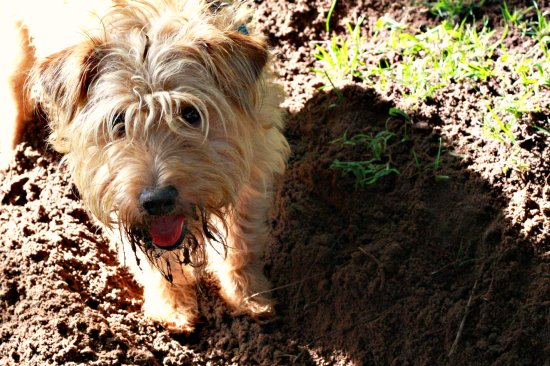 I went to investigate what was causing all the up roar, with camera in hand, because I had a feeling it was going to be interesting.  As I came up on him, this is the face I saw looking back at me.   The dirty beard is cute, yet equally annoying. 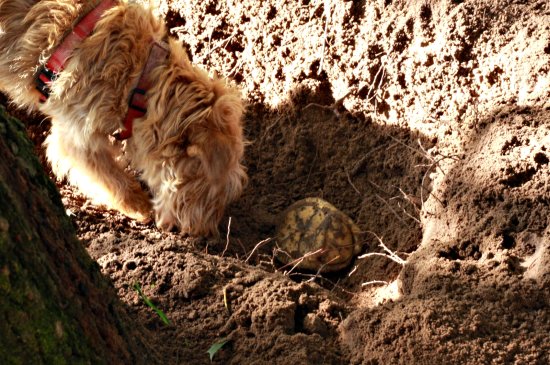 I looked down and saw the culprit.  At the bottom of a very, very deep and large hole was a poor turtle, hiding in his shell probably praying for his life.  Not to mention going deaf because of Buster’s non-stop barking. 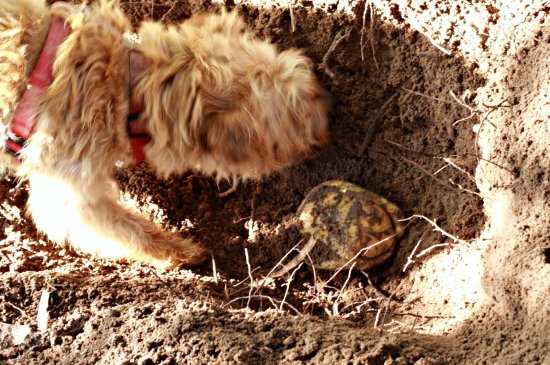 Buster wanted this turtle.  He wanted him bad.  He kept digging, nudging and barking, but that turtle was not about to come out of his shell. 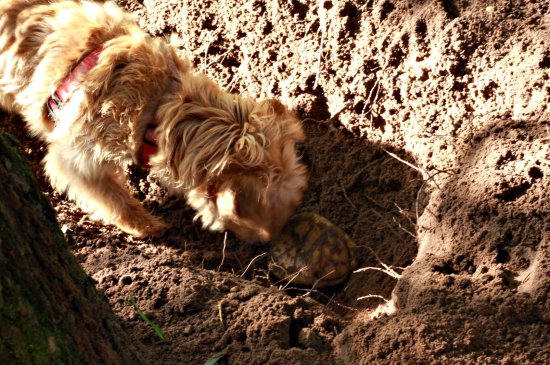 Buster made several attempts to pick the turtle up, which was physically impossible, considering it was the size of his head. 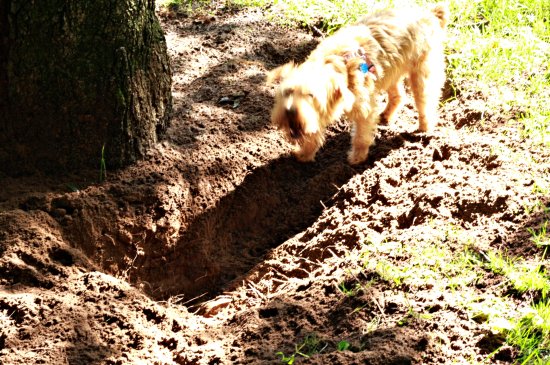 I WANT THE TURTLE!   PLAY WITH ME STUPID TURTLE!  (I am just guessing that was what he was saying.) 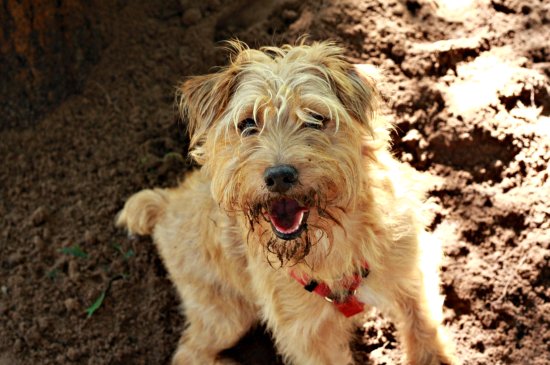 Finally I decided that the turtle probably had enough and needed to be rescued from this obsessive neurotic dog.  Buster never took his eyes off of it, he was fixated. 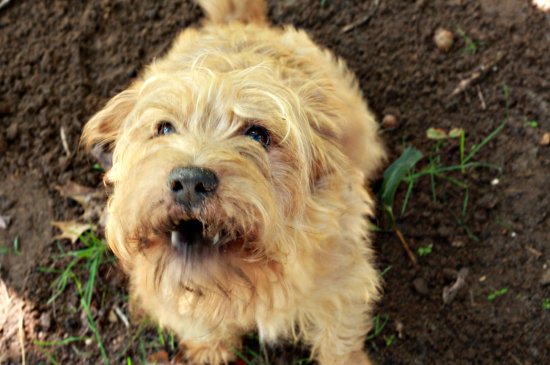 In no time he was barking again.  I think if I had put bacon in front of him, he still would have picked the turtle. 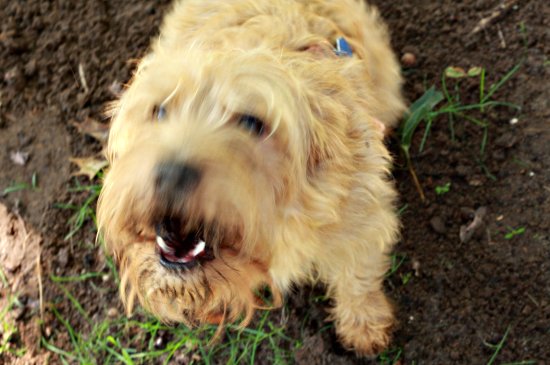 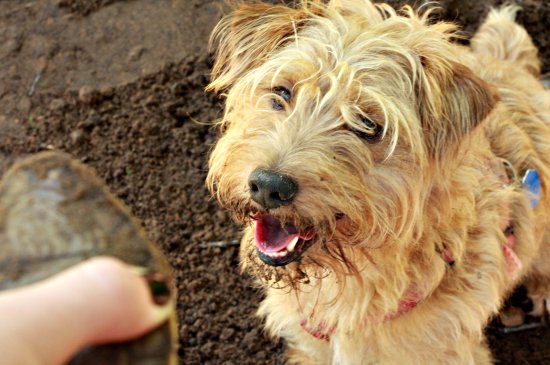 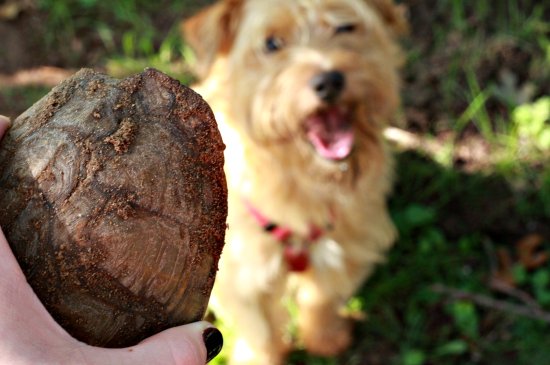 “What is so special about this turtle anyway? He isn’t going to be stupid enough to come out of his shell.” 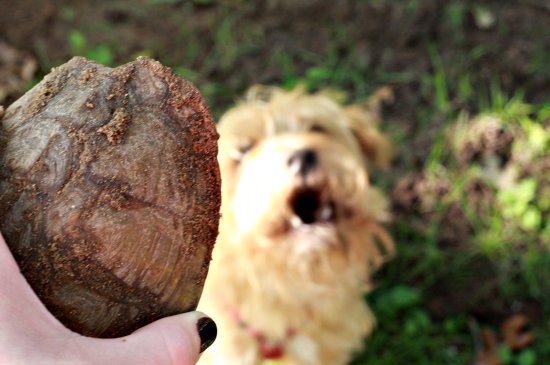 “Nice that lasted about 10 seconds.”

“Come on Mr. Turtle, lets go to the pond with your friends.  This dog is a mental case.” 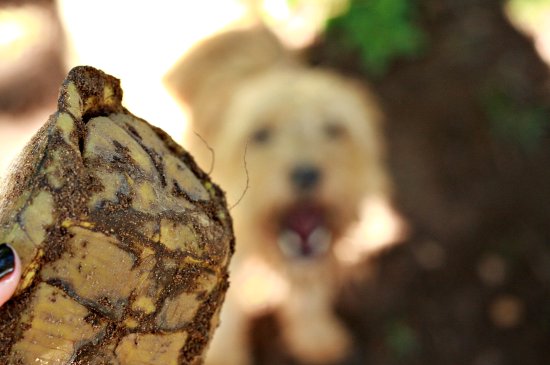 Previous Post: « A Dish from Kenya, Sukuma Wiki with Chapati
Next Post: Fall Table Dinner Party: How To’s and Tips »