A Tale of Mondo Grass, Rocks, Holes and Disappearing Water, the saga continues…..

OB spent that weekend in the hot sun digging out the rocks to patch the hole.  Unfortunately after the patch job the liner appeared to have sprung another leak.  Talk about disappearing water! He mourned the rest of the week, dreading the fact that he was going to have to dig the rocks out yet AGAIN! Score now stood at Liner 2 / OB 0.

Our mistake?  Attempting to use the preexisting liner.  Stupid cheap liner! Finally, this past weekend we went back to Hardscapes and got a manly liner.  It literally growled and grunted at us when we picked it up.  There was an obvious difference between this liner and the sad torn liner lying under 3,000 lbs of rocks in our front garden.  OB also picked up a underlayment, which creates a sort of cushion between the liner and the dirt.

Once we made our purchases we headed home determined to end this war, once and for all.  First the underlayment went down. 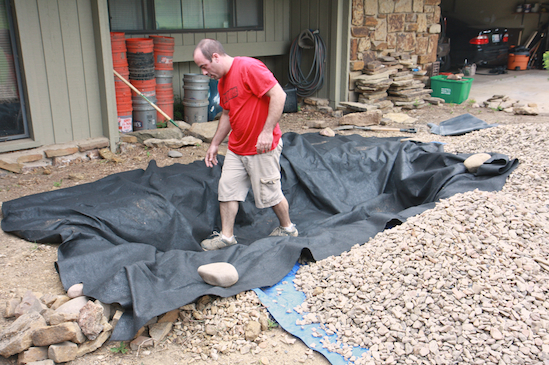 Then the manly grunting liner.  This liner was no joke, it’s made of the same rubber that tires are made from and weighed  about 50 lbs. 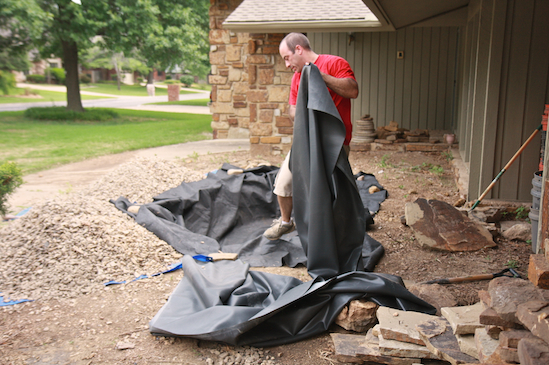 You can see the weight of it as my husband tries to spread it out.  I did eventually put the camera down to assist him. 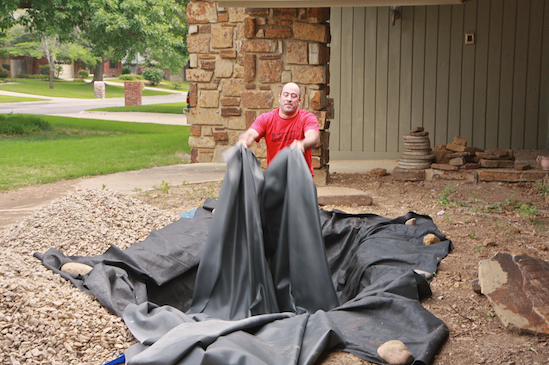 Here is a close up of the manly liner. 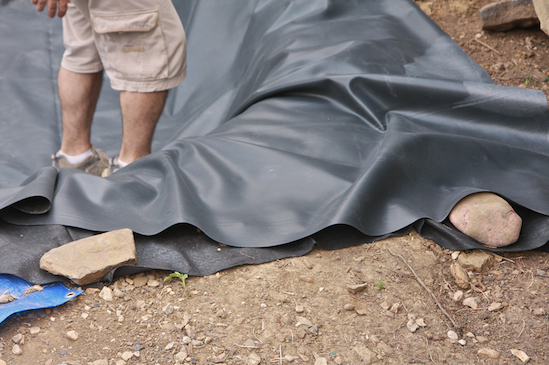 Example of previous crappy liner.  Do you see the difference?

Once we got the liner laid out how we wanted we put all the buckets back in, a total of 24 buckets and 1 pump vault. 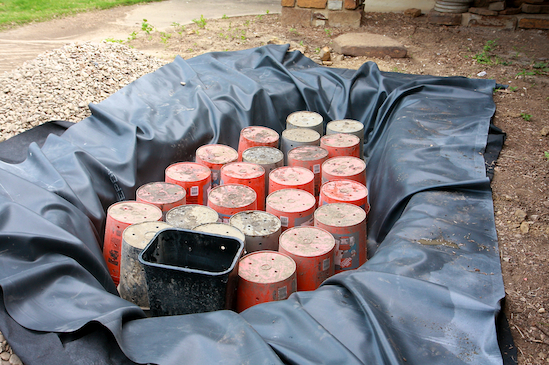 Now it was time to fill the hole with rocks…..again. 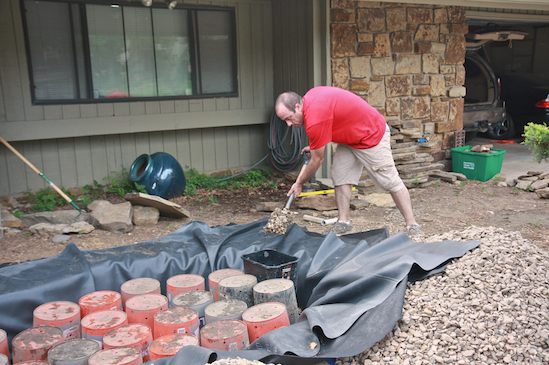 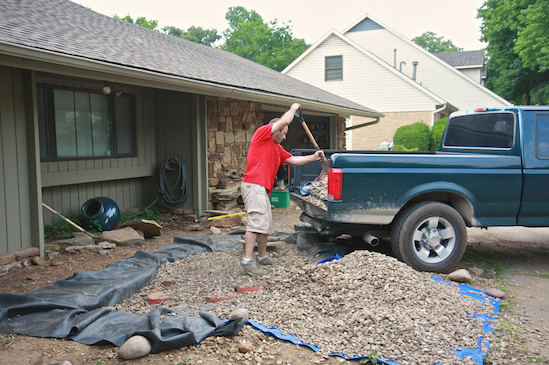 I did put my camera down to help spread the rocks but I did not shovel rocks.  I do have my limits. 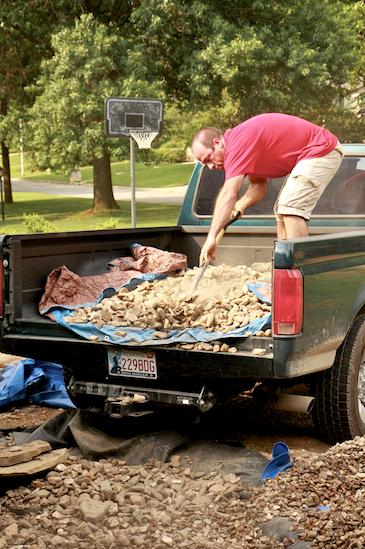 Once the hole was filled with rocks it was time to set up the water feature.  OB braced the “pump vault” with a PVC pipe to help keep it from caving.  The pump went into the vault and we fed the hose and plug through a hole drilled on the top edge closest to the where we the water feature would go. 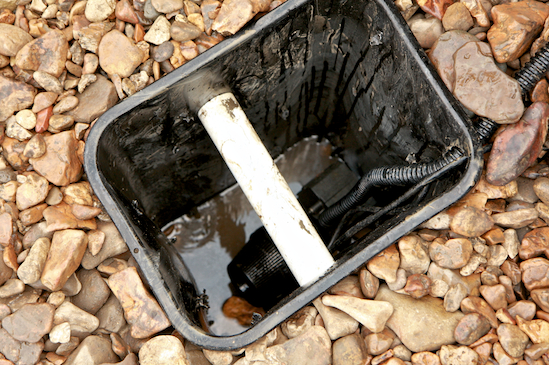 Hurray!  It was time to fill the “hole” with water. 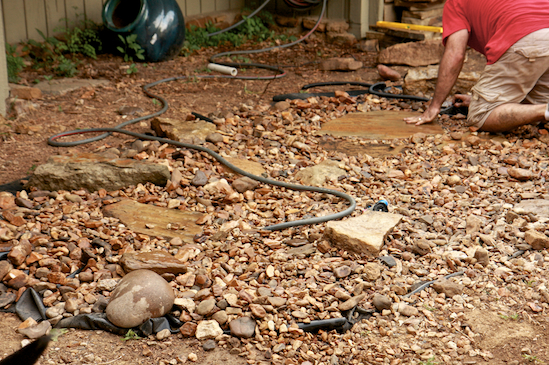 OB connected the water feature up, plugged it in and TA-DA!  It worked!  A light was gleaming at the end of the tunnel, we were half way there. 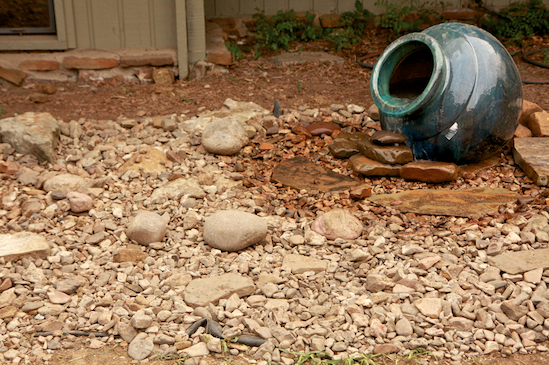 Now it was time to lay 400 sqft of weed barrier.  This step could not be skipped since mondo grass is notorious for making a comeback.  There was already some sprouting.  Back evil mondo grass!  We would lay the barrier, pin it with some weed barrier pins and then cut around the edges. 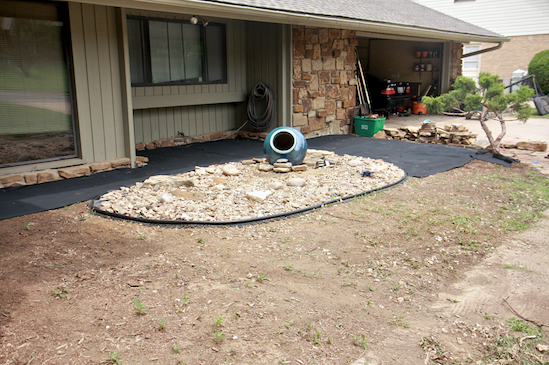 Once all the weed barrier was laid out we laid some flat stones to create a seating area.    After all of this hard work we wanted to be able to enjoy the water feature. Besides I dream of sitting in front of my house early in the morning in my PJs and spiky hair waiving at the neighbors as they head out to work.  I have always wanted to be that weird neighbor. 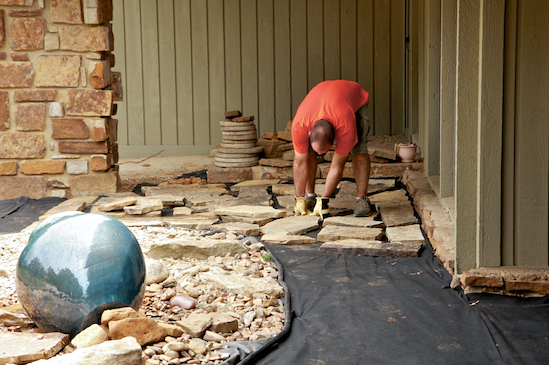 We were so close I could smell the mulch, which was no surprise since we had a load in the bed of the pickup.  There was a grand debate between OB and I, he wanted cedar mulch, I wanted black mulch.  He scowled when I suggested black mulch, but I gingerly reached my hand out looked into his eyes and told him to trust me.  I have a “way”, you know. 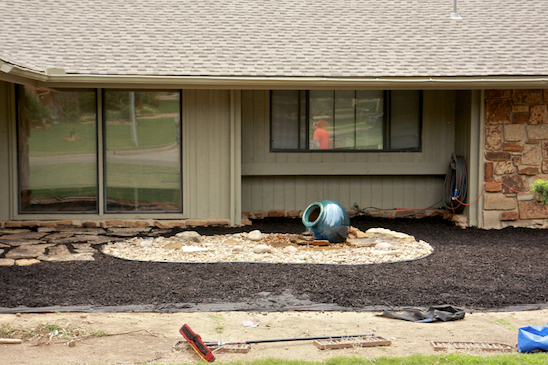 After yarding and sweating all afternoon we were done!  The heavens opened with song and I sat in my front yard and enjoyed the view.  The vegetation will have to wait, it going to get crazy hot here in OK and I don’t want the plants to die as soon as we put them in the ground.  However I did run out the next day and get two hanging baskets of sweet potato vine. 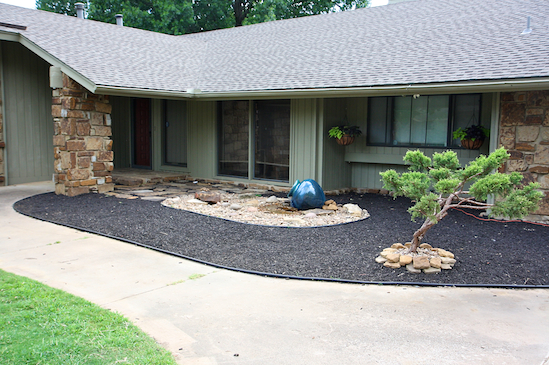 That will have to do for now, we will eventually get a few more things in pots, but we are just going to enjoy this stage for awhile. 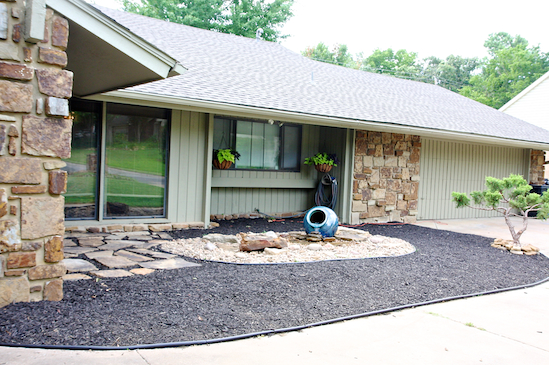 Yup, I am just going to stand in the street and enjoy the view. 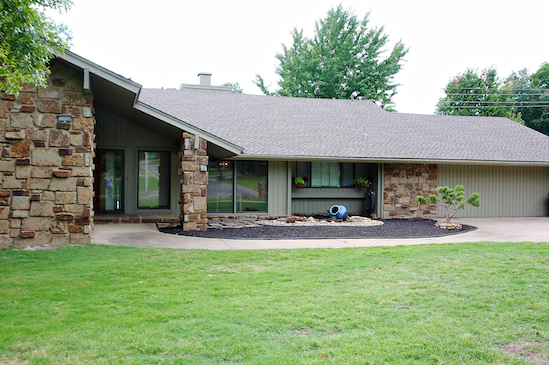 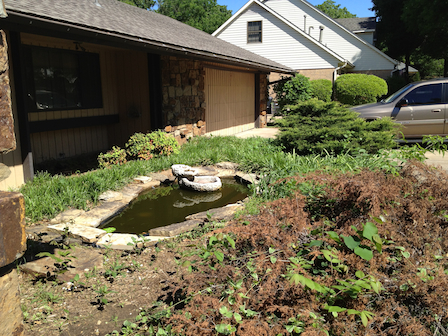